A quick FAQ about NFTs

I thought I'd write up 4 technical questions about NFTs. They may not be the ones you ask, but they are the ones you should be asking. The questions:

I'm going to use 4 sample tokens that have been sold for outrageous prices as examples.

An NFT token has a unique number, analogous to:

This unique number is composed of two things:

Here are some example tokens, listing the contract number (the long string) and token ID (short number), as well as a link to a story on how much it sold for recently.

With these two numbers, you can go find the token on the blockchain, and read the code to determine what the token contains, how it's traded, its current owner, and so on.

#2 How do NFTs contain artwork? or, where is artwork contained?

Tokens can't*** contain artwork -- art is too big to fit on the blockchain. That Beeple piece is 300-megabytes in size. Therefore, tokens point to artwork that is located somewhere else than the blockchain.

*** (footnote) This isn't actually true. It's just that it's very expensive to put artwork on the blockchain. That Beeple artwork would cost about $5million to put onto the blockchain. Yes, this less than a tenth the purchase price of $69million, but when you account for all the artwork for which people have created NFTs, the total exceeds the prices for all NFTs.

So if artwork isn't on the blockchain, where is it located? and how do the NFTs link to it?

Our four examples of NFT mentioned above show four different answers to this question. Some are smart, others are stupid -- and by "stupid" I mean "tantamount to fraud".

The correct way to link a token with a piece of digital art is through a hash, which can be used with the decentralized darknet.

A hash is a unique cryptographic "key" (sic) generated from the file contents. No two files with different contents (or different lengths) will generate the same hash. A hacker can't create a different file that generates the same hash. Therefore, the hash becomes the identity of the file -- if you have a hash and a file, you can independently verify the two match.

The hash (and therefore unique identity) of the Beeple file is the following string:

With the hash, it doesn't matter where the file is located right now in cyberspace. It only matters that at some point in the future, when the owner of the NFT wants to sell it, they can produce the file which provably matches the hash.

To repeat: because of the magic of cryptographic hashes, the artwork in question doesn't have to be located anywhere in particular.

However, people do like having a live copy of the file available in a well known location. One way of doing this is with the darknet, which is essentially a decentralized version of the web. In much the same way the blockchain provides decentralized transactions, darknet services provide decentralized file sharing. The most famous of such services is BitTorrent. The most popular for use with NFTs is known as IPFS (InterPlanetary File System). A hash contained within an NFT token often links to the IPFS system.

In the $69million Beeple NFT, this link is:

Sharp eyed readers will notice the hash of the artwork (above) doesn't match the hash in this IPFS link.

But a chain of hashes in this manner is still just as secure as a single hash -- indeed, that's what the "blockchain" is -- a hash chain. In the future, when the owner sells this NFT, they'll need to provide both files, the metadata and the artwork, to conclusively transfer ownership.

Thus, in answer to the question of where the artwork is located (in the NFT? on the web?), the answer is often that the NFT token contains a hash pointing to the darknet.

Let's look at another token on our list, the $180k AP artwork. The NFT links to the following URL:

Like the above example with Beeple, this too points to a metadata file, with a link to the eventual artwork (here). However, this chain is broken in the middle with that URL -- it isn't decentralized, and there's no guarantee in the future that it'll exist. The company "Everipedia" could go out of business tomorrow, or simply decide to stop sharing the file to the web, or decide to provide a different file at that location. In these cases, the thing the NFT points to disappears.

In other words, 50 years from now, after WW III and we've all moved to the off-world colonies, the owner of Beeple's NFT will still be able to sell it, providing the two additional files. The owner of this AP NFT probably won't -- the link will probably have disappeared from the web -- they won't be able to prove that the NFT they control points to the indicated artwork.

I would call this tantamount to fraud -- almost. The information is all there for the buyer to check, so they know the problems with this NFT. They obviously didn't care -- maybe they plan on being able to offload the NFT onto another buyer before the URL disappears. 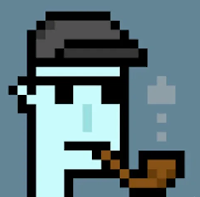 Now let's look at the CryptoPunks #7804 NFT. The contract points to the same hash of an image file that contains all 10,000 possible token images. That hash is the following. Click on it to see the file it maps to:

The token ID in question is #7804. If you look in that file for the 7804th face, you'll see which one the token matches.

Unfortunately, the original contract doesn't actually explain how we arrive at the 7804th sub-image. Do we go left to right? Top down? or some other method? Currently, there exists a website that does the translation using one algorithm, but in the future, there's no hard proof which token maps to which face inside that massive image. 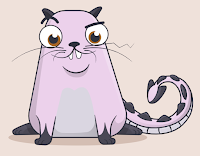 Now let's look at the CryptoKitty #896775 . In this case, there's no hashes involved, and no image. Instead, each kitty is expressed as a pattern of "genes", with contracts that specify how to two kittens can breed together to create a new kitty's genes. The above token contains the gene sequence:

There are other contracts on the blockchain that can interact with this.

The CryptoKitty images we see are generated by an algorithm that reads the gene sequence. Thus, there is no image file, no hash of a file. The algorithm that does this is located off-chain, so again we have the problem that in the future, the owner of the token may not be able to prove ownership of the correct image.

So what we see in these examples is one case where there's a robust hash chain linking the NFT with the corresponding image file, and three examples where the link is problematic -- ranging from slightly broken to almost fraudulent.

#3 How are tokens traded?

There are two ways you can sell your NFTs:

This is the exception. The rule is that NFTs are supposed to be traded on blockchain.

NFT contracts don't have auction or selling capabilities themselves. Instead, they follow a standard (known as ERC721) that allows them to be managed by other contracts. A person controlling a token selects some other auction/selling contract that matches the terms they want, and gives control to that contract.

Because contracts are code, both sides are know what the terms are, and can be confident they won't be defrauded by the other side.

For example, a contract's terms might be to provide for bids over 5 days, transfer the NFT from the owner to the buyer, and transfer coins from the buyer to the previous owner.

This is really why NFTs are so popular: not ownership of artwork, but on blockchain buying and selling of tokens. It's the ability to conduct such commerce where the rules are dictated by code rather than by humans, where such transfers happen in a decentralized manner rather than through a central authority that can commit fraud.

#4 What does this all mean?

If you break into the Louvre Museum and steal the Mona Lisa, you will control the artwork. But you won't own it. The word "ownership" is defined to mean your legal rights over the object. If the legal authorities catch up with you, they'll stick you in jail and transfer control of the artwork back to the rightful legal owner.

We keep talking about "ownership" of NFTs, but this is fiction. Instead, all that you get when you acquire an NFT is "control" -- control of just the token even, and not of the underlying artwork. Much of what happens in blockchain/cryptocurrencies isn't covered by the law. Therefore, you can't really "own" tokens. But you certainly control them (with the private key in your wallet that matches the public key of your account/address on the blockchain).

There are other missing steps. For example, I can create my own NFTs representing all these artworks and sell them (maybe covered in a future blogpost). It's a fiction that one of these is valid and my copy NFTs are invalid.

On the other hand, this criticism can go too far. Some people claim the entire blockchain/cryptocurrency market is complete fiction. This isn't true -- there's lots of obvious value in transactions that are carried out by code rather than by humans.

For example, an oil company might sell tokens for oil futures, allowing people to trade such futures on the blockchain. Ultimately, though, the value of such tokens comes down to faith in the original issuer that they'll deliver on the promise -- that the controller of the token will eventually get something in the real world. There are lots of companies being successful with this sort of thing, such as the BAT token used in the "Brave" web browser that provides websites with micropayment revenue instead of advertising revenue.

Thus, the difference here is that cryptocurrencies are part fiction, part real -- tied to real world things. But NFTs representing artwork are pretty much completely fiction. They confer no control over the artwork in the real world. Whatever tie a token has to the artwork is purely in your imagination.

Hi Robert. Thank you for the great post. It really helps reduce hype and reason rationally about NFT phenomenon. Do you mind if I post a translation of it on my blog styran.com?