I will answer a couple of popular questions about my presentation. Other than this I feel Jon and I have proved we found vulnerabilities and attempted to work with Apple. This is now a dead subject for me. The presentation and code samples should be up on both our site (erratasec.com) and the Blackhat site soon.

I thought you said it was a hijack yet you only showed a DoS.
Yup, I showed a crash. I didn’t feel the need to do the do the entire hijack for two reasons: Apple already confirmed that this vulnerability leads to remote code execution (they said so in the advisory here). Everybody that was running a sniffer during my talk now has a copy of the DoS code. The demo had two parts. I showed the crash happening on a 10.4.6 machine since it didn't have any of the airport patches. I then rebooted into 10.4.8 and the crash no longer happened. I did this to prove that the Airport patches issued on Sept 21st, 2006 fixed the problem I was demoing. The only real change to airport code was the security fixes that were issued.

You just reversed the patches and found what you then showed on stage.
I find this to be a funny argument. If I have the skills to reverse the patches and do a binary difference analysis of them, why couldn’t I use those same skills to find the bugs in the first place (they weren’t hard to find). This argument also doesn’t take into account the fact that I showed that the first crash of the exploit occurred on Jul 15th, 2006, or emails to Apple helping them build a wifi auditing box (A linux machine with madwifi patched with LORCON) and pointed them to a vulnerability that was fixed in their patches (a problem with overly long SSIDs). The picture below is from the day I bought the Macbook, July 15th 2006. This crash occurred because I was fuzzing other devices and the Macbook crashed before I got to run the initial setup. 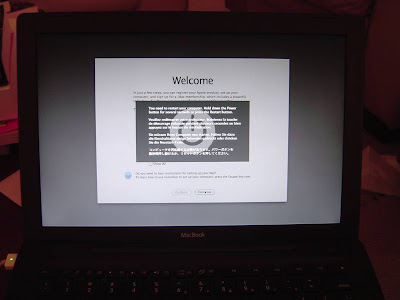