THIS IS SO AWESOME!!! 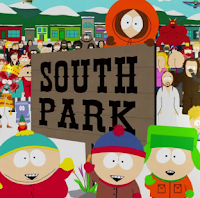 This story from Slashdot and Telegraph.co.uk:

I'm not too happy with the invasion of Iraq, and I didn't want Saddam to face the death penalty, but I always wanted him to face exactly what we thought of him. Ever since I saw the movie, I have thought to myself "I hope that if we ever catch the bastard that we force him to watch this". And, apparently, we did. I would pay money to shake the hands of the Marines who did this.

By the way, it should be remembered that the South Park movie was a musical as heartwarming and endearing as "The Sound of Music". One of the songs, "Blame Canada" was nominated for an Oscar.

On the other hand, I forbid my parents from watching the movie, because it is not "age appropriate". Senior citizens are not at the developmental stage where they can handle it (although children are, of course). Sadly, I suspect my dad has been sneaking behind my back watching South Park episodes.
By Robert Graham