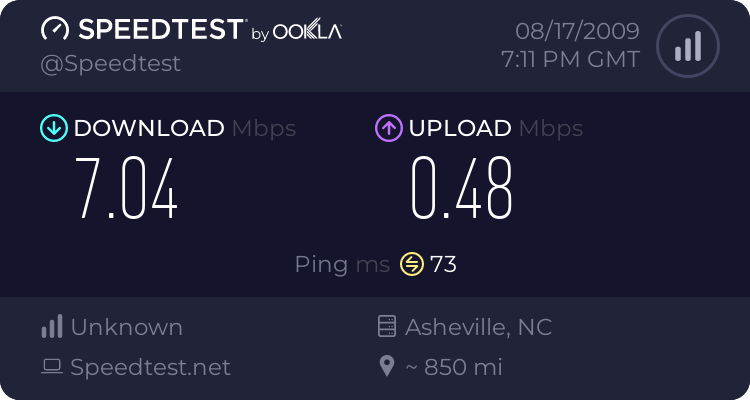 I got the "Clear" WiMax service. Here is a quick review of the service.

As the picture shows, Speedtest.net reports that I'm getting 7-mbps and 500-kbps up with 73-ms latency. This is competitive with wired speeds. I usually get high-speed service all around Atlanta. I also get service in Portland and Las Vegas, the other two cities currently supported. I'd guess that I will get service in future cities Clear will support.

However, coverage sucks. Signal at home sucks, even though it's in the middle of the coverage area, and occasionally I don't get coverage in other parts of Atlanta. More importantly, Clear doesn't work outside of metropolitan areas.

In contrast, while my AT&T 3G is much slower, it always works -- even in unpopulated areas. If the 3G service doesn't work, AT&T's service backs off to 2G "EDGE" dial-up speeds, so I can still at least send/receive e-mail.

The reason for Clear's coverage issues is that it can't have the same coverage as mobile phones. In the case of mobile phones, a carrier will buy spectrum from the government that covers an entire city, or possibly an entire state. That means they can put up towers wherever they want to maximize coverage and connectivity. Clear's WiMax is different. They are using the 2.5-GHz "education" band. This is spectrum given away to education institutions (high-schools, universities, churches) a few decades ago. It was intended for local education TV broadcasts, but virtually no school used it. Clear has leased this spectrum for their WiMax service. This means that coverage is spotty because they need to have to nearby school license their spectrum. This means coverage is likely never going to be as good as mobile phone coverage.

The Clear service is unlimited, so I can run BitTorrent on the connection (in theory, I haven't tried it yet). In contrast, AT&T has a bandwidth cap of around 5-gigabytes. I few months ago, I left last.fm running, exceeded the AT&T bandwidth cap, and got stuck with a $500 overage bill.

Both AT&T 3G and Clear cost roughly the same. I've got two USB Clear adapters for $55/month (so two people can use it simultaneously).

I haven't done any security yet. I'll get around to cracking the baseband adapter on my adapter, and writing software for the USRP. This will probably take a while before I get around to it.
By Robert Graham

Hey Robert. If you come across any findings, would you mind posting them to the wimax hacking google group?

The clear network is essentially deployed like a giant tmobile hotspot, and if you bypass the captive portal, you win the free Internet.

We managed to pull an image of the operating system off the home device, which could be fun to dig through.

You're probably in a WiMAX cell using 10 MHz of spectrum. LTE will be nearly 2x faster when using the same amount of spectrum because it will use 2xMIMO spatial multiplexing. The round trip latency (for the wireless hop) will get chopped from 60ms down to 20ms which truly gives you a wired like broadband experience. Wired broadband latency on the first hop is typically around 11 to 13 ms for any DSL or Cable technology.

As for using USB dongles, that's obsolete with devices like the MiFi which lets you carry a Wi-Fi hotspot with an EV-DO Rev A backhaul. One MiFi lets you connect several Wi-Fi capable devices at the same time.

As for in-door or in-car signal strength, it will always be about 3x weaker than outdoor signals. This is why over the air HDTV almost always requires the use of an outdoor antenna. There is a compromise where you can use a device with a larger antenna sitting at the Window facing the tower, but that's still substantially weaker than using an outdoor antenna. I think the ideal solution is to have an outdoor ruggedized MiFi device that pulls power from CAT5 Ethernet that connects to your indoor router or switch. That's the ultimate solution for the home.

Sorry about so fail service. In Moscow(RU) the situation rather different: full city covered and i have strong signal, even if i driving my car. Monthly bill is 25$ and no limit.

In the other way, there is no 3g in Moscow. The cover of 3g really sucks.