"Popular Highlights" on the Amazon Kindle 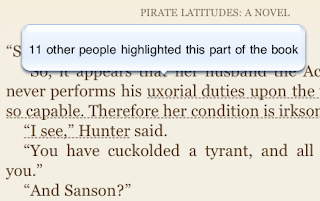 On one hand, this is a possible privacy violation. I don't see anything wrong with it yet, but it's exactly the sort of thing that makes me uncomfortable. Kindle shares your highlights this way by default, although you can turn off this feature.

On the other hand, it's a fascinating new way to read - something you can't get from paper. While reading, it encourages you to slow down and pay attention to what other people have found interesting. Likewise, if there is something that you think other readers should pay attention to, you are encouraged to highlight it for them. It's like a 21st century of a book club (where a group of friends read the same book and talk about it), but you are sharing your thoughts with the entire world.

The first two are fictional novels, Nation by Terry Pratchett and Pirate Latitudes by Michael Chrichton. The thing I noticed in these books is that the highlights don't make sense - the passages aren't necessarily witty or insightful.

Do people highlight vocabulary words? Or is it an accident? The Kindle contains a built-in dictionary. Once you move the cursor to the word in order to see the definition, it's easy to accidentally highlight the word as well.

Highlight should be more meaningful for non-fiction books. The third book I've read recently is Ayaan Hirsi Ali's Nomad. This is a book critical of Islam and which promotes the values of the Enlightenment. It is political and controversial. I know that as I read it, I highlighted several sections I thought were interesting.

For example, she relates a story where as a translator were a 7-year old Somali kid beat up another kid at school. Her story told of the conflict she had as a translator that required not only translating the language but also the culture. The Somali family felt that the other kid (Mark) started the fight because he hurled insults at their kid (Mohammed). The school was adamant that Mohammed started the fight, because he threw the first punch. This is an incomprehensible cultural divide: Somali parents teach their kids to fight, to defend themselves from insults with violence. Western school teaches kids not to fight, to ignore insults.

I was interested by this anecdote, so I highlighted it.

But there were no Popular Highlights in this book from Amazon. This is probably because the book is so new, it's only been out a couple days. Maybe I should have put off reading it for a few months, to see what highlights others might be interested in.

Or, maybe I'll skim it again in a year, to see what other people have highlighted. This would be an awesome feature for Amazon: to allow me to browse a book based on the highlights they've got on their servers, so I don't have to flip through the pages myself.

So, for the last three books, the "Popular Highlights" feature has been a bust, but I have great hope for it in the future.
By Robert Graham

"allow me to browse a book based on the highlights" - I think that's already there. I don't have it in front of me so the wording may be different... open a book, press the Menu key, then select "View Popular Highlights". It will present a list of the popular highlights for that book. You can select any of the highlights to go to that location in the book.