In one of their latest posts to their blog, the TSA (the guys in charge of US airpot security) tries to clarify "myth or fact". They outright lie on some things, and spin others. The twisted logic they use in "debunking" these myths are precisely why we don't trust them.


Myth: "TSA Advanced Imaging Technology (AIT) images can be stored on the AIT machines located in our airports" 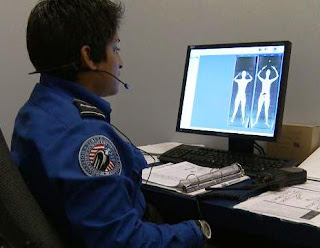 The TSA claims this is a myth. They debunk the myth by claiming "The machines used by TSA at our airports cannot store, print or transmit images. They simply don’t have that ability".

This is a outright lie. These machines are computers. All computers have the ability to store and transmit images -- the only question is the extent of this ability.

The TSA makes this claim because the software doesn't have a button on their user interface like "e-mail image to friend". But that doesn't mean these machines do not have the ability. Most of these machines are Windows computers connected to a network. When the operator sees a particularly interesting image, he might be able to hit alt-tab, open a command prompt, go to the directory where the images are temporarily saved, then FTP the imabe up to an Internet server.

Or, maybe there is a webserver on the machine, with a vulnereability that would allow hackers to log in and grab the images as they are stored to a temporary directory.

The funniest part of this is that the device always transmit images. The scanner is located at the checkpoint, the operator is in a room in another part of the airport. The images are transmitted from one point to another. Another way they can leak out is if somebody taps that line and records the images as they are transmitted.

This situation is similar to the "carnivore" controversy 10 years ago. These are devices used by law enforcement to eavesdrop on network traffic. Janet Reno, the Attorney General of the United States, gave a speach where she promised they did not have an Echelon-style "keyword search" feature.

Except they did. She lied. The truth is that they have a feature for searching for keywords that was intended to be used for a specific problem (such as search HTTP URL's for a username specified in warrant). However, the feature could easily be used for generic keyword searching. Thus the "lie" was that the FBI didn't intended to use the system for keyword searching, and therefore, it couldn't be done -- when in fact it could easily be done.

So yes, while it's true that these backscatter systems are not designed to transmit or record images, it's an inherent property of computers, and a big danger to our privacy. When the TSA denies this, they are lying.

Myth: AIT is not safe. 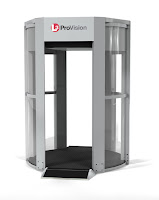 The TSA is actually right. Some of these systems (the L3 Provision used at my local airport) use microwave radiation. These are just as safe as your local WiFi access point or your cellphone.

Other systems (like the Rapiscan device) uses low amounts of x-rays. Unlike microwaves, x-rays are dangerous, can unravel your DNA and cause cancer. However, as the TSA says, the amount of radiation you get from these is less than the amount you'll get from cosmic rays during your flight (planes fly above 75% of the atmosphere, so you get a higher dose of x-ray radiation from cosmic rays that would otherwise be blocked by the atmosphere).

Or so they say. The reality is that you are comparing apples to oranges. It depends upon how you measure radiation dose and the risks. They don't look dangerous to me, but then, I haven't looked at them closely. If it's "perfectly safe", then have TSA employees go through the system every day when they come to work (rather than the current system, which exempts TSA workers from having to go through the system).

The issue here isn't so much about whether they are "safe" or "dangerous", but transparency. The TSA doesn't give us the information we can use to evaluate the danger ourselves, but instead insist that we "trust authority". Our country is founded on certain principles, one of which is that we question authority. I've searched the TSA site, the manufacturer site, and googled the entire Internet, and I still can't find any technical information on these devices.

That needs to change before we can trust the safety of these devices.


Myth: Everyone who travels will receive a pat-down.

Myth: Everybody who travels must undergo AIT screening.

I laughed out loud at this, because while either is technically optional, you must choose one or the other. Travelers must either let the TSA "touch their junk" or "view them naked".

Napolitano used this same twisted logic in this interview, where reporters forced her to be more specific when she claimed these things were "optional".

Myth: The TSA pat-down is invasive

The last time I got a pat down, the TSA agent got his hand right up into my junk. I'm not sure if it's possible to be more invasive and still be outside my body. I suppose the TSA thinks "we aren't giving you deep body cavity searches, so you should be grateful".


Myth: There has been an overwhelming public outcry against AIT.

The TSA debunks this by pointing to a recent CBS News Poll found that 4 in 5 Support Full-Body Airport Scanners.

But that's the wrong statistic. It's made up of people who mostly don't fly. The "public outcry" is coming from frequent fliers, not couch potatoes sitting in front of their TV sets saying "somebody should do something about airline safety".

Again, this reflects the twisted logic of the TSA. Their response to the public outcry against this by saying "there is no public outcry".

The machines are (probably) safer than critics claim. However, the issue isn't so much safety, but the corrupt nature of the TSA.

First of all, they say "trust us, because we are the authority". This is false for two obvious reasons. The first is the fact that they lie and spin the information. The second is the basic principle that we should always question authority. Yes, that means question authority on the safety of these devices even though they look pretty darn safe.

Second of all, they say "we are doing it for you own good". That's not how our system works. Our government is "by the people". If the flying public wants these invasive procedures, then so be it. If if government officials decide it's for our own good, that's tyranny.
By Robert Graham