Well, that's it for Bit.ly (SCRATCH THAT: MAYBE NOT)

Bit.ly support quickly responded and fixed the issue. I've included their response below.

Bit.ly is giving people the finger rather than forwarding them to this blog. Here is an example picture when visiting http://bit.ly/h7aFJc (click to enlarge): 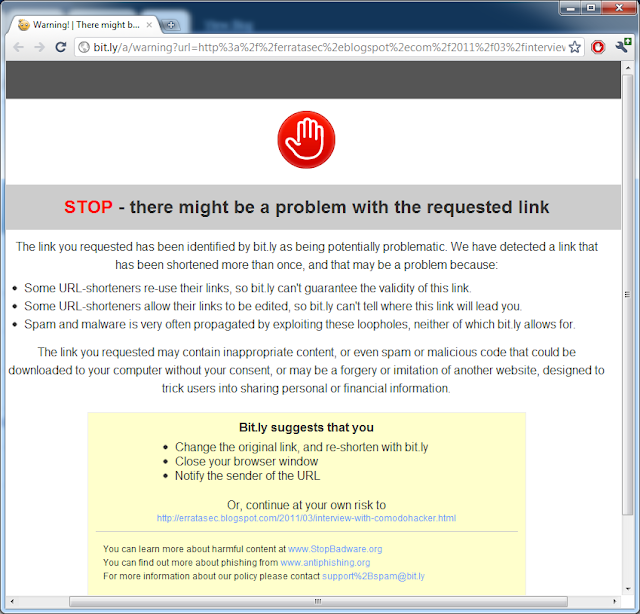 The link used to work just fine. For some reason, bit.ly decided to start blocking it with this page rather than forwarding.
I can't "fix" this as they suggest. I posted the link on Twitter, which has further been retweeted and independently tweeted (which has further been retweeted). There is no way to go back and fix those thousands of tweets.
Here is a picture from Blogger's stats. As you can see, it's doing this with several links: 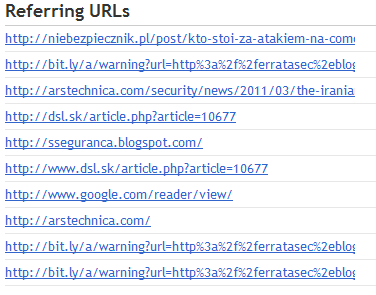 I suspect the problem comes from deeper links. This post (http://bit.ly/h7aFJc) has two links to it:
http://erratasec.blogspot.com/2011/03/interview-with-comodohacker.html
and
http://erratasec.blogspot.com/2011/03/interview-with-comodohacker.html#more
Blogger allows you to show just the introductory paragraph on the home page with a link to "More..." to see the rest of the story. In the above case, someone else shortened the #more version of the page and posted to Twitter. I'm guessing this is what has made bit.ly upset.
However, I use this feature a lot on my posts. Consequently, I can no longer use bit.ly. What should I switch to? How about "goo.gl"?

BIT.LY RESPONDS AND FIXES THE PROBLEM

You were reported for spamming. Your post is totally attacking something you never reached out to us about. If you would have reached out first vs posting a rant on your blog, maybe we would have let you know directly.

I have now unblocked your blog. Next time this happens, let us know vs running a garbage post on your blog with no facts behind it. Oh, and you might want to consider who you share links with, someone you shared your blog post with was the one that reported you.


I got this as a response to my e-mail. He (RexDixon) also posted comments below in the blogpost.

This is the rudest response I've gotten, but it's totally justified, since I was rude first with this post. I should probably have waited for a response to support@ before bloggging. I quite like the response.

Bit.ly: Could you clarify what you mean by "share links with". I don't share links with anybody. I don't include any advertising (which you can verify by going to the site). The content is 100% my own, plus anything that Blogger puts there.

I did link to pastebin files. Those files are the top "trending" files on pastebin. And the trend is due to my Tweets and blog post. But it's not spam, it's legitimate. Is it pastebin that reported those posts as spam?

I link to the pastes put there by "ComodoHacker" in the graphic below from the "Trending Pastes" at http://pastebin.com/trends

You are totally wrong. I'll send you a reply shortly. Basically - your site was reported for spamming.

You are incorrect. I'll be sending you an explanation shortly.

And I sent it to you. Your blog should be fine now. Would appreciate you writing us first before you just run a blog post full of misinformation. Thanks, and you are welcome.

The whole system of using a service that only allows for 140 characters and using third party URL shorterners as a band aid is a mess. URL shorterners has always been about temporary URLs, counting on them to survive for longer periods of time leads to link rot.

Thanks for updating the post. Appreciate it. To address @Anders comment, we address that here in our FAQ Note: http://bit.ly/a/help#i_1_5

They're feisty over at bit.ly, aren't they? It seems a bit much to ask a user to wait for human intervention on an issue like this. They should have an "appeal this blockage" link from the page you posted above. The appeal process should be really simple, probably just a captcha.

After reading RexDixon's unprofessional (not to mention immature) response to your legitimate post, I feel inclined to avoid use of bit.ly and j.mp entirely...

There are plenty of three letter domain names left under several of the two letter TLDs. register one of those and write a simple shortener. Problem solved!