I was just threatened by #OccupyWallStreet protesters

(For my complete report on the protest, click here.)


I was just threatened by #OccupyWallStreet protesters. They told me that if I didn’t give up my seat, there were going to break this computer I’m typing on. 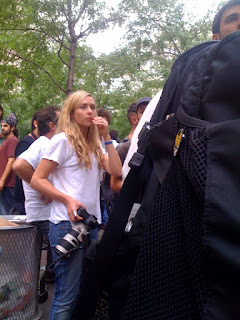 I chose a seat in the park that was far from the center of action, but apparently, the center of action moves around. The “media team” wanted to comandeer the table I was sitting out in order to setup a tripod to take pictures of an upcoming speech. Some chick carrying camera (pictured on the right)  came up to me and demanded that I leave. When I refused, she told me that they were going to setup a tripod on the table and take pictures there anyway, and that since her focus was going to be on taking pictures, she was almost certainly going to “accidentally” step on my computer.

It wasn’t just her making threats. This fascist chick was accompanied by a thug whose face was visibly twitching in anger, saying in a threatening manner “you had better leave”.

The irony of populism is that it’s really the first step of facism. Occupy Wall Street is modeled after the Arab Spring protests that occupied central squares in cities, eventually deposing authoritarian regimes. But those regimes themselves got power by “taking back” their country for the people from the previous despots. Everything these dictators did was justified as being in the name of “the people".

The fascist chick’s comments reflected this. Even after I made it clear that I didn’t support the protest, she insist that I help them anyway because they were serving “everyone’s interest”. It’s not true, most “everyone” has made it clear they aren’t interested in the protester’s brand of socialism.

Likewise, she expressed the fact that since they'd been occupying the park for two weeks, they were in control of who could sit where. This is exactly how populists become fascists: principles of freedom important when out of power are lost once they gain power. It's how Castro and Che Guevara visciously suppressed dissent once they gained power in Cuba (the famous picture of Che isn't as a revolutionary in the jungle fighting the man, but was taken short after Che's show trials of political opponents). Now that the #OccupyWallStreet protesters control the park, they won't tolerate those who don't obey their commands.

The reason I didn’t give up my seat is because in general, I respond stubbornly to intimidation. For example, last year the TSA detained me for taking pictures in airport security, something that is perfectly legal, allowed by the TSA’s own rules, and from a larger point of view, necessary for keeping authority accountable to the public.

By the way, there was a third guy. When I said “no” to giving up my seat, he smiled, shook my hand, and said “peace”. He was the model of how the protesters should be, with the ability to think privately "I think you are a dick, but I'm going to rise above it, shake your hand, and move on". Just become some of the protesters are fascists doesn’t mean they all are. Also, the others didn't carry through on their threat, they simply set up elsewhere. Finally, most protesters were quite happy to debate their point of view with those who disagreed with them, albeit they are painfully condescending.


Update: comments over at Reddit take exception to my use of the word "fascist". Of course, I'm using that term in the casual sense, such as the way you might describe a cop beating up a protester as a "fascist". Likewise, I might casually use "anarchist" to describe a punk throwing stones at a cop, even though I know that "anarchist" has a much richer sense; indeed, as a Libertarian, I might describe myself as an "anarchist" in the sense that I oppose government control, but not in the sense that I would throw rocks at cops.

But since you bring it up, there is a lot of overlap between Occupy Wall Street and fascism, such as "hostile to finance capital, plutocracy, the 'power of money', and internationalist economics" (to quote the Wikipedia page on Fascism). It would be wrong to claim that Occupy Wall Street as actually fascist, but where they overlap, it isn't unjust to point this out.
By Robert Graham

Good for you man.

Stand your ground against the protesting scum.

I think "fascist" is highly appropriate here. One of the hallmarks of fascism was the intimidation of opponents by physical force (threatened or applied as necessary).

These red/green/black fascists have discovered that one can cause a great deal of discomfort or disruption without ever doing anything that the law can effectively punish.

It's easier and more fun than actually persuading anyone.