Internet is indeed a human right 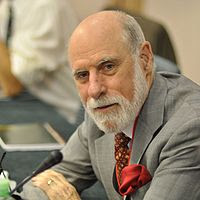 Vint Cerf (former Founding Father of the Internet, and current Google lobbyist) says that the Internet access is not a human right. He is profoundly wrong.

The gist of his argument is that the Internet is just technology. It’s how we use this technology (for things like speech) that is the human right, not the technology itself. That’s the wrong way to look at it. New technology adds new complications that require clarification.

Vint Cerf says "It is a mistake to place any particular technology in this exalted category [human rights], since over time we will end up valuing the wrong things". The printing press disproves this -- even though actual printing presses are certainly becoming obsolete, the values they revealed are not.

For example, government originally licensed printing presses. The reason was that the press introduced new economics. It cost a lot to setup the press for the first copy, but subsequent copies were very cheap. You could only pay back the original investment if you could sell a lot of copies. If two printers decided to print the same thing at the same time, then neither could recoup their initial investment, and both would go bankrupt. Therefore, some coordination by the government was “needed”. This was the situation before 1709 in England. The abuse of that system, such as government censorship, forced the laws to change (“Statute of Anne”).

Update: Eugene Volokh has a great discussion of this here (summarized here). Samuel Johnson's 1755 dictionary makes no mention of the newspaper industry when defining "press". It wasn't until after the First Ammendment was written that "press" started to be used for "newspaper industry".

We have the same situation today, where today’s copyright laws are used to stifle freedom of expression. For example, #Anonymous hackers created a “mashup" video of Tom Cruise effusively praising Scientology. Scientologists exploited copyright law in order to take the video off the Internet in order to suppress legitimate criticism.

A simple statement of “rights” would do much to clarify things. Today, the SOPA law (designed to protect copyright) is not unconstitutional. Now consider a “right” that says “Government shall not abridge access to the Internet”. Suddenly, this proposed SOPA law is obviously wrong, because “abridging access to the Internet” is precisely what it does. It's not just copyright abuse, but issues from cyberwar to cyberbullying to regulation of Terms of Service to privacy: a clarification of rights is important.

Or consider phrasing it as "Government shall not abridge access to information". It's a minor change, removing the reference to technology. It introduces a new right, "information", that we didn't know we needed until the Internet came along (much how the printing press introduced rights we didn't know we needed). Information is every much as important as speech. But referencing the technology is easier: it gives us this new right, as well as resolves the complications with existing rights. If Vint Cerf followers convinced me I'm wrong, and that Internet (or cyberspace) is not a right, I would still insist that unrestricted access to information is a fundamental right that needs to be enumerated.

We can measure the importance of Internet-as-right in the inverse, in proportion to the efforts repressive governments take to restrict access to the Internet. Take China, for example. Their "Great Firewall of China" blocks large parts of the Internet. They force Google to remove items from its search results, such as any mention of the Tienanmen Square uprising, or even references to the recent Arab Spring (in case it's citizens get any wrong ideas). It's not speech being repressed here so much as access to information. In both repressive and free countries, we now see more attacks on Internet access than we do on speech, religion, or newspapers.

Vint Cerf is correct in saying that we need no clarification to know that the Egyptian Internet cutoff (to silence protests) was evil. Be he is incorrect in saying no clarification is needed. The First Amendment is not technology neutral, the 18th century version calls out the technology of the printing press, and the 21st century version should call out the technology of the Internet. Internet access is a human right, and even well-meaning governments are already infringing it, because of the lack of clarification.
By Robert Graham

Consider the "right to healthcare". Obamacare fulfills the European definition by providing more healthcare to people, but it breaks the BillOfRights usage by imposing restrictions on healthcare in order to cut costs (like taxing Cadillac health plans).

In my article above, I mean only "human right" that government cannot infringe.

The Hugo Award winning novel "Barrayar" briefly touches on this. A woman from an advanced planet married a guy from a less advanced planet. The subject of lack of cyberspace access comes up. She mentions that it's the first right of the (former) planet's consitution: that access to information shall not be abridged.

Are you arguing that internet access is a right, or implied by some other right? The first amendment has been read to be technology neutral and to extend to digital mediums, video, etc.

Do you really want to phrase this right the way you did? Or have you not gotten yet to what you think a more formal statement would be?

The First Amendment is not technology neutral. It clearly calls out the technology of the printing press. A 21st century version should also call out the Internet.

Do you have a reference for it being technology specific?

Reading this now myself for more background - http://www.pennumbra.com/issues/pdfs/160-2/Volokh.pdf

And in either case, perhaps things phrased more like they are in the Universal Declaration of Human rights would be more successful and less suspect to posturing about whether a phone call is protected if we only protect the Internet...

OMG, that's an awesome link I did not know about (even though I'm a fan of Volokh). As your link says:

"But other judges and scholars—including the Citizens United majority and Justice Brennan
— have argued that the “freedom . . . of the press” does not protect the press-as-industry, but rather protects everyone’s use of the printing press (and its modern equivalents) as a
technology."

Obviously, intellectuals can disagree on this point, but it's nice to see this reference.

You may find this article interesting. In it Smyth mentions that

"according to the Oxford English Dictionary, a definition of "the press" as a collection of literature ("[n]ewspapers, journals, and periodical literature collectively") emerged in the English language in the late 1700s and early 1800s."

In modern times, the Internet = the press as defined above. You are spot on when you say that SOPA flies in the face of this most fundamental of our human rights.

From your link:
Volokh notes Samuel Johnson's A Dictionary of the English Language (1755), the most widely used dictionary at the ratification's time, gave no definition of "press" in terms of today's common understanding of "the press" as a collection of journalists but did define "press" as "[t]he instrument by which books are printed." Volokoh mentions that, according to the Oxford English Dictionary, a definition of "the press" as a collection of literature ("[n]ewspapers, journals, and periodical literature collectively") emerged in the English language in the late 1700s and early 1800s. However, before and at the Founding, the Founders did not use this "press" definition when discussing press freedom.

I really should've looked up these references before writing my piece, but I couldn't remember where I'd seen them.

A bi of a side note, but I wish more people would consider "original meaning" arguments when talking about what words meant 200+ years ago. I have a link to the digital copy of that entire dictionary just for the same reason.

So now we're into an originalism argument about the meaning of the first amendment? This is why explicitly writing something to be technology neutral is probably a good idea, right? :)

I'm one of those "originalists", but even I know that there is no real single meaning. Even if "press" meant the technology, I assume people interpreted also to mean the newspaper industry.

For my purposes, though, it's this "technology" that is an important meaning we have lost. It goes to the heart that directly disproves Cerf's assertion.

Robert, you are wrong. Just plain wrong. the Bill of Rights, the constitution, laws have been interpreted over time to include new technologies.

Why is the "Internet" ie, the technology that powers the Internet, not a right? Because the technology is ephemeral but the act, the capability to engage in free speech, to access information, to education, to communicate is not *regardless* of the technology used.

The notion of rights resides in property, ownership, and power. The populace doesn't what their power taken to collaborate, commune, discuss, rebel, protest, etc, which is what gov'ts want to do when it is threatened.

Would you rather have the right to speak, read, and learn about what you want or do you want the right to use HTTP and render HTML. That is the difference.

So go ahead, crank up your printing press, print all the pamphlets you want and distribute them on the street corner. You have that right, by your argument and no one will take away your press until they pry your ink stained hands from the wheel.

Your phone, radio, TV, and computer, that's all privilege.

I liked the article. I really liked the Barrayar reference.

As a proponent of "free will/choice" I have only two things to comment: (1) not everything is healthful or beneficial information, and (2) you have to accept the consequences of your actions/choices.

Unfortunately I have seen little evidence in this world of trained zombies to make believe that the masses know what is healthful or beneficial for them.

Nor have I seen any general willingness to accept the consequences of their actions or choices.

Neither of these points however would ever stop me from letting people make their own choices.

Addendum to my earlier comment: You can lead a person to knowledge... but you cannot make them think.