I bought a "NAS" ("network attached storage"), which is just a Linux appliance with a friendly user-interface that hides the nasty details of Linux (unless you want them). Naturally, it doesn't work as promised, and I've had to do a lot of trouble-shooting. This post describes examples

The first thing I did was create a share, then backed up all my hard drives from my desktop onto NAS. However, while the files where there, I couldn't see them. Here's what I see when I look at "\\nas\main" (where "nas" is the name of the NAS, really creative, eh?): 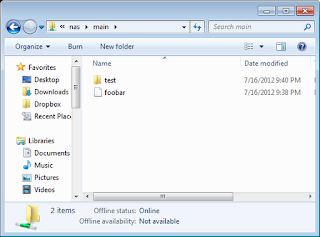 What's missing are the subdirectories "D", "E", "M", and "v" -- names I created that match the drive letters that I backed up.

These are perfectly visible from other machines, such as from another Linux box (Ubuntu running in VM):

From the same Windows machine from the command-line instead of the file-browser, I don't see any directory names: 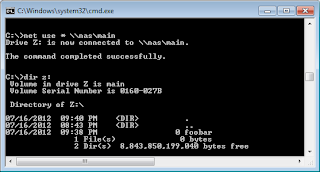 I should at least also see the "test" directory that matches what I see in the Windows file-browser.

So, where's the problem? For that I use a packet sniffer to see what went across the wire:

As you can see, the NAS server is correctly delivering the complete list of directories to the Windows machine. Therefore, whatever the problem is, it's probably not the NAS server. Of course, since I just got the NAS, I'm quick to blame the NAS, but according to the packet-sniffer, the problem appears to be on the side of Windows.

Ah, wait, I spoke to soon. Expanding out the directory listing, I see that the files I'm not seeing have been marked "SYSTEM" and "HIDDEN":

Solution!
After further investigation, making directories, and sniffing the packets, I realize that "robocopy" appears to be culprit. When I make a backup to a directory on the NAS, "robocopy" marks it as hidden for some reason. I don't know what, but at last I've pinned down the problem as being neither the NAS or the Windows 7 desktop.