There is a problem with sexual harassment at cybersec/hacking conferences like Defcon. Women stay away because of this. I’m sure most all of us agree this is a bad thing.

But that doesn’t mean we all agree on the solution. In particular, I’m highly offended by the angry solutions that infantilize both men and women. Such policies go too far trying to address minor issues, but don’t address other important issues.

Men aren’t trying to harass women. No man goes to a conference intending to harass women. Instead, it’s a side effect men are unaware of. Policies should be about educating people as to the consequence of their actions, not about threats and punishment. Exhibitor “booth babes” and presenter’s sexualized imagery are good examples: people do it because they see other people do it, and don’t understand what’s wrong with it. If they know people are offended, they are happy to stop. All you need to do is tell them that it’s undesirable – you don’t need threats.

Harassment happens in a myriad of ways that conference organizers are powerless to stop. For example, you might be out with a group of people at night and a guy creeps up on you, starting with shaking your hand, then touching your shoulder, then touching your hair, then groping you. The problem with this is that it’s a dirty creepy mess. The guy was using the “boil the frog” strategy leaving you confused as to where to draw the line, as you suddenly find yourself in a social situation that you realize you should’ve put a stop to several steps back. Thus, you are left with an unhappy experience questioning yourself as to what you should’ve done, with nothing to go complain to the conference organizers about. This will leave you less likely to want to attend the next con, but it’s not something threats or punishments by the conference organizers can “fix”.

Education is a better solution to this than threats. Men should be told that just because she hasn’t slapped you doesn’t mean she’s in to you, it just means she is in a social situation she's had little experience with.

The thing about hostile, threatening policies is that they discourage legitimate speech. People become scared and go too far censoring themselves. It becomes something that can be exploited by the disgruntled to censor things that have little to do with sexual harassment. As a guy, I don’t see the cases of sexual harassment that I know exists (from reliable reports), but what I do see is the frequent exploitation of anti-harassment policies.

So here is how to write an anti-harassment policy: assume the reader agrees with you. This means threats, punishments, and other hostile language isn’t needed. Fill it full of specific examples from past cons to demonstrate the sort of thing you don’t want at your con. Help the reader understand where the limit is.

The BruCon anti-harassment policy is a great example of how not to have a policy (well, their first version based on one at Ada Initiative, it may be edited by now). It does little to educate those who don’t know they are doing things wrong, and yet threatens dire punishments to those who really care, so that they might go overboard on self-censoring themselves. It creates a hostile environment for everyone, even before the con starts.

Update: Erich Simmers has some good context and conversation about this post here: https://weaponizedculture.wordpress.com/2012/08/08/sexual-harassment-at-hacker-cons-and-what-to-do-about-it/

Update: Such militant policies regularly lead to restrictions on free expression. A good example is the case of James Miller, a theatre professor at the University of Wisconsin. He had a poster from the cult TV show Firefly outside his door with quote form the show: "You don't know me, son, so let me explain this to you once: If I ever kill you, you'll be awake. You'll be facing me. And you'll be armed.". Campus authorities took down the poster, and threatened Miller with criminal charges if he posted anything like that again.

In response, he put up a poster showing a cartoon image of a cop beating a protester with the caption "Warning: Facism: can cause blunt head trauma and/or violent death. Keep fascism away from children and pets.".

Campus authorities responded by taking this poster down, too, and escalated their threats against Miller. 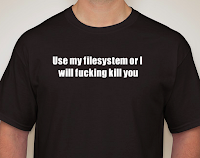 One of the funniest T-shirts at Defcon contained the text "Use my filesystem or I will fucking kill you", referring to ReiserFS, a Linux filesystem created by Hans Reiser, who was later convicted of killing his wife. This shirt is really funny, yet is exactly the sort of shirt that whiney crybabies will go conference staff to complain how they feel threatened.

Stringent, "no tolerance" policies against bullying, threats, and harassment necessarily mean attacks on freedom of expression. We should oppose them, especially when less stringent alternatives are available.

Update: Some have said "so what would your anti-harassment policy be?". Ok, here is one below. Notice I use the word "please" instead of threats:


Exhibitors: Please, no "booth babes" or otherwise using sex to promote your products.
Speakers: No offensive jokes, especially those that might offend the opposite sex. No pornographic images. No sexualized images or content, unless relevant to the talk. If in doubt about appropriateness, please discuss with conference staff ahead of time.
Attendees: Please be aware that there is an enormous male-to-female sex ratio, with the consequence that females feel harassed by too much unwanted male attention, making the con experience particularly unpleasant for them. Do not "grope" or touch women in inappropriate places; one would think we shouldn't have to ask, but apparently, this happens often enough that we do. Be aware that just because a woman hasn't forcibly turned you down is that it's because she's trying to be polite, having expected to be treated as a colleague at a technical conference rather than a conquest at a bar. Please be especially aware of this when drinking, as your judgement is highly impaired: it's certain that if you are having a real good time, that lady you just met isn't. Not having maced you yet should not be treated as an invitation.
Ladies: It's horribly unfair to ask anything of you in order to be treated as a human being, but there are three things. First, please feel free to be rude -- these creeps are usually thick headed rather than malicious. Second, most people around are civilized, and saying things like "get this creep off me" should get others to come to your aid. Third, please contact conference staff about any concerns in order to make this (and future) conferences less hostile, especially by identifying creeps that we can kick out of this (and future) conferences.


Update: This "sexism at cons" was recently popularized by @kdotcdot with her post about carding creeps. She enthusiastically supports the BruCon policy. Of course she does: she claims to be an anarchist, an ironic political philosophy that typically supports fascist rules. I'm a different sort of "anarchist", which is to say, a libertarian who supports fewer (and nicer) rules, rather than more fascist rules.
By Robert Graham

I'm a guy. I gave a short talk at a hacker con within the past 12 months. My talk was informative and mostly funny, but that doesn't matter. In my talk, I included a bad (read: sexist) joke. Some people laughed, many didn't. This experience taught me that such jokes fall flat and I should find something different. Great.


Then the emails started. I apologized to the people that politely said they were offended, but those were in the minority. The majority: angry people who saw my talk called me a rapist, an asshole, a jerk, a misogynist. People threatened me with violence should they ever see me, one going as far as to say I should kill myself because I'm an awful human being.

I'm a pretty introverted person. For me, it takes a lot of courage to get up and speak in front of a room filled with my peers. The harassment I received crushed my desire to do public speaking. It has absolutely guaranteed that I will never speak at a conference again.

How long do you think harrassment has taken place at cons? Do you think education has been tried before? How effective has it been?

Does more harassment take place at cons than in everyday situations like work or shopping? Why or why not? Employers occasionally find themselves paying through the nose for harassment claims, and they don't hire certain types of women and men to prevent that. Since cons are unlikely to exclude in this way, perhaps they need to find other ways to exclude or at least isolate volatile people of both genders.

They need to do this in a fashion that won't distract from their broader purposes, but it seems that sternly-worded policies might have a place anyway. (A "policy" by itself won't do anything, but organizers don't HAVE to follow their policies to the letter.) Deciding simply not to have certain types of events might also help. Con organizers need to think clearly about their goals. Certainly they want to encourage women to attend, but that's probably not their primary goal.

I'm not really questioning the motives of con organizers here. They have a set of constraints and goals and they'll meet those more or less well. Instead I wonder what people like the Ada Initiative folks want. Do the really stern policies seem calibrated to empower women in general, or rather to benefit activists in a political sense at the expense of both women and men? If organizers have to choose between making their con more welcoming and making it more buzzword-policy-compliant, it's safe to say that the latter criterion will dominate. Maybe it's like most activism, where you try to be as extreme as you can in general, but always looking for a beneficial compromise. That's unlikely to find the "truth", but it can find incremental improvements.

Those who aren't just offended but rather are transported to Crazy Town by off-color attempted jokes in presentations: do they never watch TV? Does their mind break every time they are caught off-guard by an R-rated comedy? Did they never learn in a coeducational environment?

Politeness has left our society... too many parents stopped disciplining their children when their brats were impolite and now society faces the consequences.

Sexual harassment wouldn't be as big an issue today if people were raised or personally decided to be polite and exercise self-discipline/self-control.

Heinlein had a point: in a society where people go armed daily in public people are polite and better behaved.

So I was reading Wikipedia (as you have oft suggested doing), and decided to check out what you were really calling KdotCdot. Fascism:

"Fascists seek elevation of their nation based on commitment to an organic national community where its individuals are united together as one people in national identity."

Is she that kind of fascist? Or perhaps:

"Fascism advocates a state-controlled and regulated mixed economy; the principal economic goal of fascism is to achieve national autarky to secure national independence, through protectionist and interventionist economic policies."

Oh, this is probably what you meant: "Fascists commonly utilize paramilitary organizations to commit or threaten violence against their opponents."