Microsoft is toast, here's why

According to the logs (screenshots below), slightly less than half the visitors to this blog used Windows. Moreover, only 4% used Internet Explorer, less than the 11% using Mobile Safari (iPhone/iPad). While readers of this blog don't represent the whole market (of course), they do represent where the market is going. Where Microsoft's market is going is down the toilet. 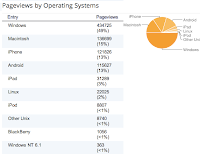 This is why Microsoft is panicing with the iPad-focused Windows 8 and it's Surface pad. While these moves seem radical, they are in fact not radical enough. Microsoft's monopolistic control over the pixels in front of your eyes is at an end. It's now Apple and Android who are in control of the future. Microsoft has no hope of dominating the future of mobile devices like they did with the desktop. Their best hope is to be among the top three, and there is a good chance they won't even reach that.

It's not that there is anything wrong with Windows 8. I'd even call it a "great" system according to many metrics. It's problem is that it's too late. It doesn't have the app support of Apple or Android, so it doesn't get penetration in the market. And, because it doesn't have market penetration, few write apps for it.

What I find funny is that Microsoft knows this. Steve Balmer (and Bill Gates) acutely remember how they took the computing crown away from IBM in the 1980s, nearly bankrupting IBM in the process. Back then, IBM failed to appreciate how the microprocessor was an existential threat to its entire business. This time around, Microsoft's leaders know it's in deep trouble, but knowing still doesn't help.

By the way, the thing that Microsoft failed at (and what Apple succeeded at) was predicting Moore's Law. Moore's Law meant that at some point, handheld devices would be able to run a full operating system -- the full versions of Linux, Mac OS X, and Windows. According to Moore's Law, Vista should've been running on ARM processors as Windows 8 RT does today on Surface. That way, when Apple announced a handheld device running Mac OS X, Microsoft could've pivoted as fast as Google did with their handheld Linux (Android). Instead, Microsoft was caught with WindowsCE/WindowsMobile -- a completely separate operating system that shared only a few APIs with the full Windows. This cut-down operating system optimized for handhelds was created a decade early, and was great in many ways, but it couldn't do basic tasks like surf the web with a real browser.

Microsoft has responded well. They may only be a year late. But a year is forever in technological revolutions. Once the market leaders become established, it becomes nearly impossible to enter the market. The only real option is to change the market. There are ways Microsoft can still do this. Maybe "cloud" is the way. Maybe the XBox home connection is the way. Maybe corporate BYOB security integration is the way. I doubt, however, that college students dancing and clicking to dubstep is the way. I kid, because Microsoft is going to have to invest in a lot of risky things that in retrospect will turn out to be stupid in simply to stay alive in the mobile future.

So here's my prediction: the share of Windows (on all platforms) and Internet Explorer in my logs will continue to decline. Next year I'll probably blog showing stats confirming this. I like Microsoft. I spend most of my time using Microsoft. VisualStudio and Word are awesome. It's just that I don't see a rosy future for them.

Update: another path to victory is if Intel succeeds in bailing them out. Intel's Atom processor is excellent competition with the ARM, and Haswell/Broadwell may eventually become even better competition. The wealth of x86 apps can then compensate for the lack of ARM apps.

I wouldn't be surprised most of your readers actually used AdBlock or similar, and would not even be tracked.

So I write about a different aspect of this at the theverge.com's Microsoft Tribe.

There I said:
"Microsoft is taking their bread and butter OS and merging their whole software stack in one iteration. Wide-open-throttle. Unprecedented. Even if Windows 8 gets lukewarm market penetration it doesn't matter. The change has been made. The growing pains exercised.

The next Windows OS cycle refresh will have already been thought about and improved upon. The missing thing every media-tech pundit has forgotten is when Microsoft learns their lesson they evolve ceaselessly."

And although we don't quite know what Windows Blue is or how it plays out -- I still think it is the start to MSFT merging slowly and thoroughly their RT, WP8 and Windows 8/server stacks. They know what they have to do to improve on Windows 8/ModernUI.

I disagree with you in that MSFT doesnt have a rosy future. If you step back and realize no one yet has the go to device for real PC class work and play. MSFT has taken the first step. I personally believe we wont really see Windows 8 come into its own until we see the three deciding factors play out in the market place: battery life performance for x86 intel core devices, CPU performance for Atom based Windows 8 tablets and finally which form factor will win out?

If there is a coherent, usable Atom based windows 8 tablet in a compelling usable form factor with above average SSD performance to offset the CPU -- Microsoft might be in a good position where they cull the majority of use cases beyond the iPad's reach, but just shy of a full powered desktop/laptop most folks don't need. That is the very least Microsoft needs to do and it they most likely will. No one has a device which can hit all those points and bridge the gap between cut down mobile/current tablet apps and full fledged x86 legacy apps. Windows 8 does.

The data in the Operating systems chart does not seem to agree with your argument. With 49% of users are using Windows, with the next highest as Macintosh at 15% it is not very clear that Microsoft is losing anything. In fact, you can probably use that data to argue the opposite.

Do you have any more hystorical data to show a decline from previos months or years?

I think blog reading is going to show a shift very quickly. It's practically what mobile devices were invented for.

The most interesting will be 'in the middle'. Email and PDF reading would give some interesting figures.

Microsoft and Sony in my living room -- connected to my TV. Controlled by Android e.g. tablet-as-mouse, DLNA/UPnP, etc. Perhaps controlled by Leap Motion or similar in the near future.

Yes, I'm typing this from a MacBook Air, but only because my work requires me to use Xcode. All of my Apple gear is tied up with work. I don't use it outside of work.

The reasons for all of this are obvious, Moore's Law not even aside. What this generation needs is Corning's vision of "A Day Made of Glass", but what needs to drive the `glass' is an open-source, collaborative-oriented OS with a solid inter-app communication system.

From my perspective, Android is that OS and Google's infrastructure is that cloud to drive the collaboration components. Even though all of the parts aren't fully connected and collaborative yet... I have been able to drive some of them. For example, I take hundreds of pictures in seconds with Fast Burst Camera and then select the gallery of hundreds of images, "share" them (in this case I am using an Android pay-for app called Andmade Share Pro), and upload them to Google Drive. It almost works, but when this works with everything, then software has reached it's own sort of Moore's Law state of existence.

Success in the mobile space has nothing to do with API, popularity of API, or ability for phone to match tablet/netbook "full" OS and its API. It doesn't matter which CPU manufacturers sync up with which ISVs.

The mobile space only exists to create a market vehicle for new technologies in the human-computer interface space. This is an area that Microsoft Research, Nintendo, and Sony excels at -- not Apple or Google.

I think we'll see all of these players and more. Microsoft may have lost temporary dominance/momentum due to the HCI shifting to phones and tablets. But there are many more HCI shifts that will occur very, very soon.