Haswell and cybersec: it's about the crypto 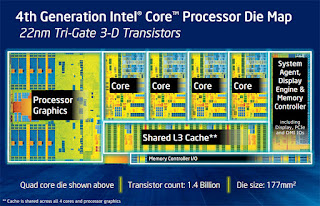 This last weekend Intel formally released their “Haswell” x86 microarchitecture. I thought I’d discuss the changes that are meaningful to cybersec. The tl;dr version is this:

What is a “microarchitecture”?


There are two names to an Intel x86 processor: the technology codename, and the market segment.

Intel updates its technology every year. The codename for last year’s technology was “Ivy Bridge”, this year’s is “Haswell”, next year’s is “Broadwell”.

Intel targets its chips at different markets. The “Core i3” is for the low-end of the desktop/notebook market, the “Core i7” is for the high-end, and “Xeon” is for servers. The lower end chips are slower and less capable than the higher end chips.

This document is about the new features that will appear in the Haswell versions of the Core i3 through Core i7 and Xeon.


Previously, Intel added instructions for specific algorithms, such as the “aesinc” instruction to accelerate the AES encryption algorithm (this appeared in “Westmere” in 2010).

With Haswell, Intel adds instructions that should accelerate all encryption algorithms. Some example instructions are:


The upshot of these instructions is that they will likely double the speed of any arbitrary crypto algorithm. Soon after the release of Haswell, we’ll see these improvements in software libraries like OpenSSL and John-the-Ripper.

Note that Intel’s motivation isn’t necessarily speed but power consumption. When using Haswell in notebooks and tablets, there is a noticeable increase in power consumption when video/audio is protected by DRM. Greater crypto efficiency translates to longer battery life.

Note that the new “Jaguar” chips found in the Xbox and PlayStation will also have these new instructions.

To fix this, Intel has added new “transaction” instructions. The problem with multi-core software is that when two threads change the same memory location, they will corrupt it. The solution for this problem is for one thread to stop-and-wait for the other to finish its changes on the small chance that corruption might happen. That’s why software doesn’t scale to many cores, because it spends most of its time waiting.

What “transaction” instructions do is allow code to continue forward without waiting. The hardware tracks if corruption occurs, and when that happens, rolls everything back to the start of the transaction. Such rollbacks are no more expensive then the original stop-and-waits they replace, but will happen much less frequently. This will enable code to scale to many more cores.

This is important to us because of lot of what we do in cybersecurity, from IDS to firewalls to crypto, is limited by the speed of the processor. Scaling across many cores will dramatically increase the speed of a lot of security code.


Companies like nVidia and ATI thrived because the default graphics that come with Intel processors has been slow. Games were sluggish without the addition of a graphics processor aka. “GPU”.

Haswell triples the speed of its graphics over last years Ivy Bridge, which in turn was twice as fast as the previous Sandy Bridge. Haswell graphics match the speed of the low-end GPUs, but at half the power. Last year’s MacBooks came with nVidia graphics, the rumor is that this year’s MacBooks will just use Intel’s graphics.

Moreover, Haswell graphics are programmable with OpenCL. Password-cracking tools like Hashcat and John-the-Ripper should be able to exploit this in order to dramatically speed up cracking.

Note that while Haswell graphics catches up with nVidia and ATI for notebook graphics, it’ll still be behind on the desktop. Desktop chips are free to become very large and power hungry, so are much faster than even the fastest notebook chips. Thus, gamers will still want the most expensive desktop cards.

Low power and “System on Chip”


Haswell is Intel’s answer to the encroachment by ARM.

There is myth that ARM has an inherent RISC advantage over Intel x86. This is nonsense. Intel already has many RISC competitors, like SPARC, PowerPC, and MIPS, and data centers aren’t flocking to them for their low power. Instead, the advantage ARM has is that it comes as a “System on Chip” or “SoC”, combining the microprocessor with all the other chips that make up a system.

While Haswell will come as a standalone processor, it will also be shipped as an SoC. This will dramatically change the notebook market, allowing notebooks to last twice as long on battery. It will also make Haswell a great chip for tablets. Rumors are that tablets with Haswell will consume as much electricity as Apple’s iPad does now – while being much faster.


I think the biggest change is Intel’s dedication to crypto. That crypto causes performance and battery problems is one reason it’s adoption has been slow. By fixing this, Intel helps ensure that crypto will be included everywhere.