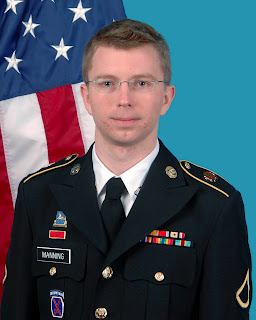 The website https://pressfreedomfoundation.org/ hired a court reporter in order to publish transcripts of the Bradley Manning trial. The first day's transcripts are here. This majority of this transcript is the "opening arguments" -- the unfiltered arguments directly from the horse's mouths, so to speak.


The government lays out the case that Manning decided to help Wikileaks first, then searched the private military network for things that Wikileaks wanted second. For example, the "Wikileaks Most Wanted List 2009" asked for information on detainees, so Manning searched the Intelink search system (the google for SIPRnet) for "detainees", according to prosecutors. Prosecutors claim that four days after Wikileaks tweeted they wanted .mil email addresses, Manning downloaded 74,000 such addresses. Finally, Manning frequently search for the search term "wikileaks" itself on the SIPRnet.

The defense opening arguments points to non-Wikileaks motivations, such as Manning's "humanism" and incidents like one in December 2009 where a convoy had needlessly killed civilians. They point out that Manning had access to a lot more information, but that he only leaked the things that would help humanity, but would not harm his fellow soldiers.

I'm paraphrasing, highlighting the bits I found interesting. For the full opening arguments, you should read the transcript.

A big controversy is the charge that Manning "aided the enemy" which carries the death penalty. Many claim this charge will have a chilling effect on whistleblowers in the military. But, if the prosecutors can prove their case, then it means that Manning wasn't a normal whistleblower. It's one thing to come across something accidentally that's so outrageous you feel it needs to be exposed. It's quite another thing to actively hunt for things, especially at the prompting of an outsider. If Bradley Manning's thoughts were "I can't wait to get to Iraq to get access to SIPRnet to start looking for things to expose", then I wouldn't call that "whistleblowing". I find the prosecutor's case to be a bit weak (we won't know until we see all the evidence later in the trial), but I agree they have good reason to treat this other than as a normal whistleblowing case.


Another thing the transcript discusses is how open the court proceedings are to the public. The general consensus among the press is that it's not terribly open, and they struggle to get accurate transcripts of the trial. But, according to the discussion in the transcript, the government claims it's done everything reasonable to make it open. It appears the government is completely wrong about this.


Lastly, I want to point out the way the government describes things, such as Bradley Manning's "mastery" of "wget". I sometimes get the impression is that as much as anything, Manning is being tried for his skills in witchcraft.

If Manning grabbed 74k email addresses because Wikileaks asked for them, then this is clearly not a case of whistleblowing. I don't know what it is, whether "aiding enemy" is the appropriate charge. I don't know if the evidence supports the government's claim: it could just be coincidence. I don't know what's going on, and that we'll need to see more as evidence comes out in the trial.
By Robert Graham