Those who have not read Orwell are doomed to repeat him 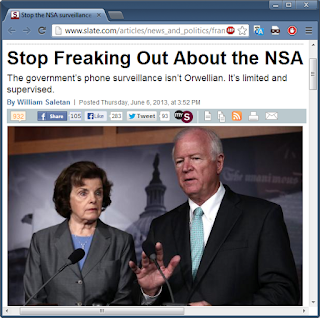 Journalist William Saletan writes that the government's surveillance program isn't Orwellian because the government surpervises itself. But government supervising itself doesn't make something less Orwellian. If anything, it it makes it more.

To quote Wikipedia, the book Nineteen Eighty-Four is about "perpetual war, omnipresent government surveillance, and public mind control -- under the control of a privileged inner party elite". As I show below, so is the NSA's surveillance of American citizens.


We are in perpetual war with "Islamic Extremism". In the Carter administration, 37 years ago, we declared a "state of emergency" that has been renewed continually since. More recently, since 9/11, we've been at war in Iraq and Afghanistan in the two longest wars in American history.

Islamic terrorism used to justify the NSA surveillance program is clearly Orwellian. Every argument our national leaders have used about "terrorism", and how such surveillance is "necessary" to protect us, is echoed in his books. It's false there in fiction, it's equally false now in real life. From Saddam Hussein to Mohomar Ghadaffi, every dictator of my lifetime has likewise used the threat of external enemies to justify the internal repression of his people.


It's true that the NSA isn't wiretapping our phone calls, listening to our our conversations. It's just getting the call "metadata". But, as many people point out, this is even worse. You cannot make a telephone call anymore without the government knowing who you called. Moreover, the government knows to within a mile where you are (with your cell phone) at any moment of any day. The hero/heroine of 1984 found it easier to escape the omnipresent surveillance in the book than you would find it evading the modern equivalent. Just because this surveillance fails to to be omniscient doesn't meant it isn't omnipresent. It easily fits within the definition of Orwellian.


The more memorable bits of 1984 are how propaganda has been elevated to a science, which gives us such terms like "newspeak" and "doublethink". Here is your best argument for non-Orwellian, because our government does not coerce speech in an obvious fashion. But, in a myriad little ways, government has succeeded in controlling thought.

Here's a personal example. Back in 2007 I gave a talk at a cybersec conference. A couple days ahead of time, the FBI showed up at my office. While repeating, many times, that I had a right to free speech and that they couldn't tell me not to speak, nonetheless they wanted to cancel my talk in the name of national security. Then, they made is clear that if I did not "do the right thing", that they'd taint my FBI file with drug allegations so that I could never pass a background check again. Kafkaesque? Orwellian? It's hard to figure out a better term.

Another example is the field of cybersecurity, in which I'm a leading expert. Sure, there is a national threat from hackers, such as Chinese stealing secrets or power grid failures. But it's not the threat that you think it is. I watch aghast as the government has successfully morphed people's thinking about the threat into something that justifies government control. You'd think that the "free press" would stand against this, but since they are completely dependent on the government for information about hackers (because everything is classified), they have no choice but to go along with the propaganda. This is Orwellian to the extreme.

The final proof of mind control is Saletan's circular logic above, that you can trust the government because it's policing itself. Even by Orwell's own standards, this is one impressive doublethink.


Instead of a single Party, we have a two party system (Democrats and Republicans). These two parties have obvious philosophical, principled differences while campaigning, but once in power, seem to behave like clones of each other -- as a single Party. President Obama campaigned against the NSA monitoring under President Bush, promising to abolish it, but ended up strengthening it. This single Party attitude means there is little way that the electorate can oversee and challenge surveillance laws.

The picture at the top of this post shows two Senators, one a Democrat and one a Republican, who are on the relevant committees to tasked with NSA oversight. While of opposing parties, they are both notorious for their disregard of civil rights. That increases the irony of the Saleton post, that he'd use these Inner Party members as an example of what the NSA surveillance isn't Orwellian.


My argument here isn't that the United States as a whole is Orwellian. We are still one of the freest countries on the planet, if not the most free. My point is simply that the NSA's indiscriminate monitoring of all phone metadata is Orwellian in every sense that something can be Orwellian. It's perpetual war. It's omnipresent surveillance. It's maintained by propaganda. Due to Party control, it's difficult to challenge. Anybody who says otherwise has either not read Orwell, or is an idiot. The only way we are going to stay a free society is by recognizing such things, and opposing them.

So true it makes me sad.

OK Robert I buy your argument (actually I was already persuaded) now what can we do about it? You have described some of your own personal security steps, but what about collectively?

Is there anything we can do to reverse the abismal path our government is on? Is there any hope?

To start...
1) Be prepared to vote out elected officials who continue Orwellian practices - even if they're a member of "your party"
2) Contribute to the ACLU, EFF and other groups that can make headway in courts
3) Make sure your kids/nieces/nephews understand the lessons of 1984 and their civil liberties

What to do about it? the most effect you'll have is calling your congressman/senator and talking about your concerns (well, with their staff most likely, but that's ok). Better yet, visit them in person.

About what can each person do, bullshit, you can't do that much.

Not many USA citizens feel the fear to speak up against the USA government but that will come soon. It's just a big oppression case away to a battle lost. In that time, it's safer to follow the herd.

Did you know that German law after WW2 forbid any kind of communications' interception because if it is possible for that to happen that was enough to the people to be less free, people refrain itself to get into troubles even if they try to abide the law.

Related, if you have enough laws/vague laws so no knows if they are a criminal, a justice system that no one expects to be safe from (defense expenses are doing it in USA) and the feel of unstable growing oppression (this is a good case) and you have an wrecked state. The growing news of the surveillance reach, the pursuit of the darings, the impunity of government officials and the blatant violation of the old restrictions (constitution for example).


I bet that will be a lot of blood shed before a turn of events.

It was nice to be apart of the Internet while it was fun and free.