The increasing cyberization of the NDAA

The yearly "National Defense Authorization Act" is the yearly defense budget for the U.S., currently over $600,000,000,000. It also sets defense priorities and authorizes defense related activities. For example, two years ago the NDAA infamously authorized the indefinite detention of American citizens suspected of terrorism (and this year it'll try to regulate the proliferation of cyber-weapons). 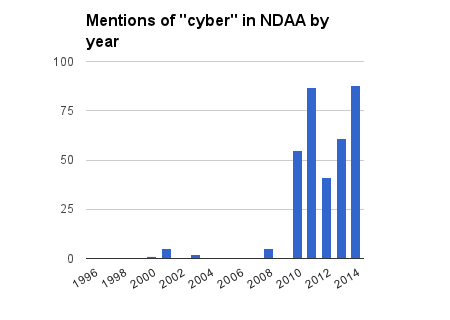 It's 2010 that I can find the first authorization of offensive cyber capabilities. Every NDAA since has had a complete section devoted to "cyber". Much of the language repeats the previous year's content, reflecting continuing efforts to develop offensive cyber-warfare capabilities.

Note that the "cyber command" or "USCYBERCOM" was created in June 2009, the same month when the 2010 NDAA was drafted. The NDAA doesn't mention USCYBERCOM directly, but I assume the two events go hand-in-hand.

I've collected the links going back each year to 1996 (prior bills don't seem to be available on government website). You can find my spreadsheet with links to the original NDAA texts here (in case you want to replicate my results, or do a better analysis with things like "computer security").

I wonder how many of these people know what the word "cyber" actually means.