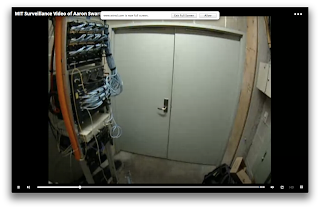 A common misconception about the Aaron Swartz case is that he broke into the wiring closet in order to hack into the network. The recently released surveillance video shows this is not true.

What you see in this video is a typical wiring closet. At the top of the rack, behind it, are wires that fan out to all the nearby rooms. If you are in classroom, and connect your laptop via Ethernet to the wall, this is where the other end of the wire ends up.

What you see is that one of the patch cables on the switch goes downward to Aaron's laptop instead of upwards to the patch panel. As far as the network switch is concerned, it doesn't matter if Aaron Swartz connected directly via a patch cable to his laptop, or connected via one of the Ethernet jacks in classrooms/hallways.

The reason Aaron put his laptop in the closet, instead of connecting via the hallway jack five feet away, is so that somebody wouldn't steal his laptop. It has nothing to do with nefarious activity trying to hack or break into the network. There are many issues about the Swartz case, and simply entering the closet may be physical trespass, regardless of what he did in the closet. I'm just pointing out he didn't enter the closet in order to hack the network.


I point this out because these technical details matter, and people keep getting them wrong, on both sides of the Swartz case. For example, Marcia Hoffman and Orin Kerr (two lawyers who have helped with Weev's appeal) got these details wrong in a talk they gave last year at ShmooCon.

Awesome! But can you help me to find a
Ottawa