Freaking Infrared: How Does it Work?

I bring this up because of this discussion of whether the police should be able to point infrared cameras at your home. The legal discussion got derailed by the technical belief that such cameras can see inside buildings or under your clothing -- which would be a huge invasion of privacy. But they can't do that. Infrared cameras can only see the outsides of things, like normal cameras.

It's easy to see why people would be confused, as magical infrared imagining is a staple of TV shows and movies. In the movies, police can regularly see everything that happens inside buildings. For example, the screen shots below show the heroes looking through walls, seeing people walking behind them, which is impossible in reality:

But what about the chase of the Boston bombers? Infrared video from a manned drone flying overhead was leaked to the internet. It clearly shows Dzhokar Tsarnaev hiding beneath what should've been an opaque tarp. Isn't that proof that infrared can see through things? Well, in this case, the tarp was made of polyethylene, which is opaque to visible light but transparent to infrared. If you look closely at the video, the tarp is the only thing the infrared can see through. 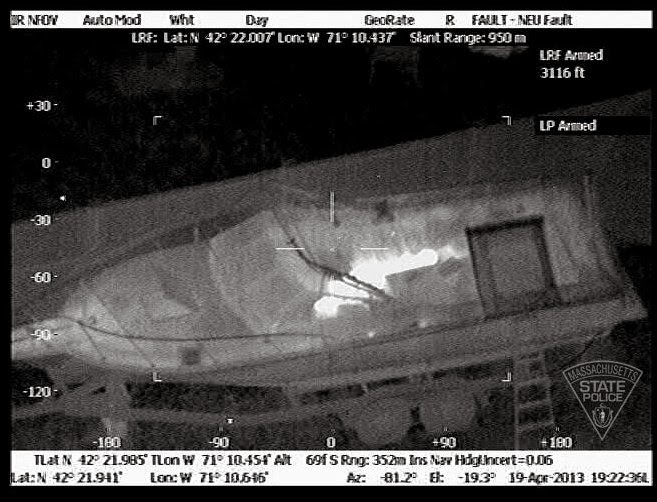 That plastics sheets can be transparent to infrared, but opaque to visible light, is also shown in the following YouTube video. The video shows several home experiments with an infrared camera, demonstrating that walls and clothing are not see-through, but a plastic bag is.


The legal question was the case Kyllo v US from the year 2001. Police went through a neighborhood looking for houses with hot roofs, indicating marijuana growing operations. The Supreme Court ruled that it violated the Fourth Amendment, because seeing infrared was a magical ability the police had, but the common man did not.

But, as Orin Kerr points out, this is changing, At CES2014, a company announced a $350 accessory that clips onto the iPhone that'll do even better thermal imaging that the device the police used a decade ago. Thus, now that the average person can easily view infrared, it's possible that the Court may now decide that the police can, too.

In the current climate of distrust of domestic spying, many people think this banning of police infrared is a good thing. However, it works both ways. If thermal imaging is something that the police shouldn't do, then it means that it's something the average person shouldn't be able to do, either. This would lead to outlawing of a useful device that really has few privacy problems.