EFF: some are more equal than others 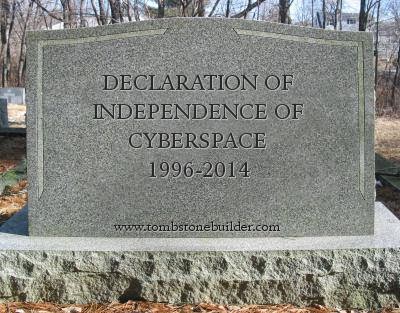 George Orwell's Animal Farm was about how revolutionary principles are quickly morphed to service those in power. For example, when the animals on the farm rebelled, they stated the principle that "All Animals Are Created Equal", but when the pigs took power, that was amended to include "...But Some Are More Equal Than Others".

That's a good description of the EFF, the Electronic Frontier Foundation. They have no fixed set of principles that they fight for, but instead change their principles according to whatever is popular at the moment, whatever will get them the most donations and influence.

An example of this is the "Declaration of Independence of Cyberspace", a document abjuring all regulation of the Internet, with forceful statements like "You have no sovereignty where we gather". This document was a reaction to how the telephone network was regulated as a public utility, which killed innovation. The pride it expresses in the Internet is that it invented itself, not merely without government's help, but despite government's hostility (e.g. the GOSIP regulations).

But today, the EFF has changed it's stance, calling for government to regulate cyberspace as it does other public utilities. For example, they have setup a website https://www.dearfcc.org/ asking you to lobby government for more regulation.

The same is true for other stances by the EFF. For example, they claim to support the rights of coders, but have had as one of their board members (Lawrence Lessig) somebody who championed that idea that code should be regulated, and have come out against 'bad' code like 0day exploits. Their excuse is that they haven't actually explicitly called for laws against 0days -- but that was their excuse back when they started championing Net Neutrality (that calling for net neutrality wasn't technically the same as calling for regulation).

This poses a quandary for me. On one hand, the EFF fights for many of the things I fight for, so I should work with them even if I don't agree 100%. On the other hand, their malleable principles makes me feel that I could just as easily end up like Snowball (the pig who gets eaten).
By Robert Graham