Everything can be a bomb 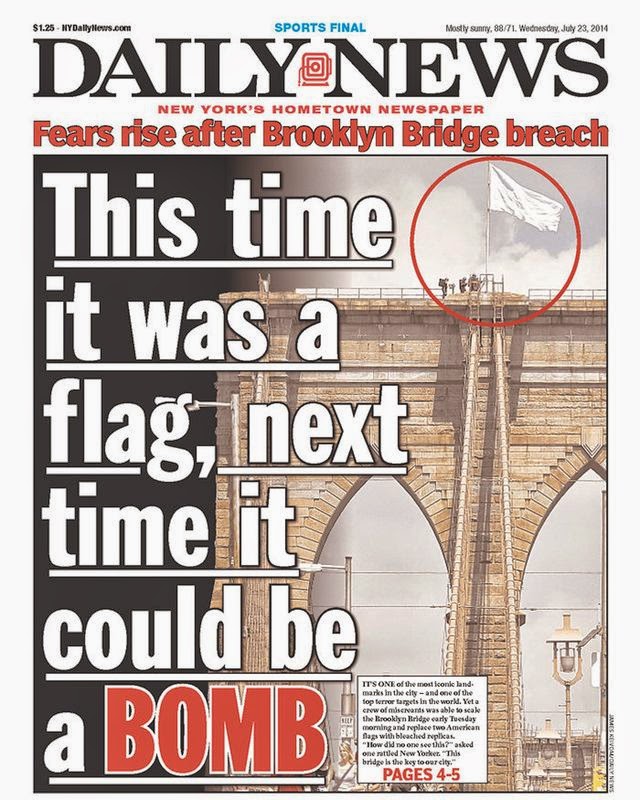 This last week, pranksters replaced the US flag on top the Brooklyn Bridge with a white-flag. Nobody knows who or why. Many in the press have linked this to terrorism, pointing out that it could've been a bomb. Not only local New York newspapers have said this, but also CNN.

Such irrational fears demonstrate how deeply we've fallen for police-state fears, where every action is perceived as a potential terrorist threat.

It could've been a bomb, of course. But what could also have been a bomb is a van full of C4 explosives driven across the bridge. There are no checkpoints at either end inspecting vehicles with bomb sniffing dogs. What also could've been a bomb is a ship full of fertilizer that, when ignited, would act as a small nuke. The point is that everything can be a bomb. Instead of using this as justification for an ever increasing police-state, we just need to accept this and live with the danger -- because this danger is, in the end, tiny. A thousand 9/11 events would still not equal cancer, for example.

I mention this because the former 9/11 commission released a new report yesterday stoking the fears of cyber-terrorism, calling for an increase in the cyber-police-state. This is nonsense. If government wants to fix cybersecurity, their first effort should focus on fixing their own computers rather than violating our rights. Enable SSL on all government computers, disable SQL string pasting, and get rid of all default/backdoor passwords.

Government is trying to ratchet up the fear of cyber-terror. It's not that their scenarios aren't possible, it's that they use this fear to drive the police-state. In exactly the same way we shouldn't have bomb sniffing dogs checking every car before it crosses the Brooklyn Bridge, we should not have the current proposals for cybersecurity that violate rights.

For some reason this strikes me as a Photoshop hoax that somehow the papers believed. Doesn't it look like a regular flag that just got lightened a bit?

It was a bleached flag according to the reports.

Are you interested in attaining enlightenment and personal growth?


Are you interested in preventing and curing cancer, Alzheimer's, high blood pressure, and many other common diseases using an inexpensive, natural indian spice called turmeric?

Take two teaspoons full of turmeric powder mixed with a cup of warm soy milk (or any kind of non-dairy milk that you'd like). Also eat 2 or 3 black peppercorns along with it, as the pepper helps your body absorb the turmeric better. You also need fat for the turmeric to be absorbed properly, which is why drinking turmeric mixed in water won't work. You have to drink it with milk or some fatty based liquid. Do this twice a day and you will start to feel amazing within a couple of weeks.


If you have any questions about yoga, meditation, spirituality, or natural cures, feel free to email me at delugar@mail2tor.com