I gave $10 to every presidential candidate

What happens when your candidate drops out of the 2016 presidential race? What do they do with the roughly million names of donors they've collected?

I've decided that somebody needs to answer this question, so I've donated $10 to each of the roughly ~25 current presidential candidates (yes, even the hateful ones like Trump and Lessig). By donating money, I've put myself on the list of suckers who they can tap again for more donations. After the election next year, we'll be able to figure out how each candidate has used (or misused) the email addresses I gave them.

For most candidates, the first two pieces of information they ask of your is #1 your email address and #2 your zip code. They need the zip code so that when there is a local rally in your area, they can contact you to get your turn out. But as a side effect, it means being able to extract favors from local politicians.

I suspect one use of this zip information is when one Representative goes to another and says "If you support my bill, I'll blast out a fund raising message for you to all my donors who are in your district". Therefore, to do this right, I'd have to make a donation from every congressional/senate district in the country. I'm not willing to go that far.

A donor list also adds to their influence within their respective parties. I suspect that once they drop out of the race, candidates will start pumping their email lists with pleas for donations to the party.

Interacting with the various websites tells me a lot about the candidates. Hillary's gave me the impression of one the smartest websites. She appeared to handle all the important technical features herself on the website, rather than outsourcing everything to third parties (as you'd expect, since she's been running for president longer than the Internet has been around). Once you sign up on the website with an email address, and then decided to donate, her's was the only website to filled in your address/zip for you, so that you didn't have to type them in again.

Rand Paul was the only one who accepted Bitcoin, of course.

There is a wide spectrum on exactly what the website does. For many candidates, it's just a storefront. You go to the site once to donate and find out about the candidate's stance on the issues, but then you never go there again. Others are more complex, going full tilt interacting with people over the Internet. Rand Paul's website is very complex this way -- such as providing images for supporters to put on their blogs (as shown here). But then, he's really more part of a wacko libertarian movement than just a candidate.

These sites don't like like they did 8 years ago. All the websites have big fonts and images, so that their content works well on phones. Marco Rubio has this annoying "infinite scrolling" thing going on. Rick Perry has a pretty awesome video (instead of image) as the background.

The websites vary in their use of dark patterns. These are techniques on websites that encourage people to accidentally do the wrong thing, such as sign up for things they didn't intend. Most of the emails contain tracking images/links designed to detect when you've received an read your emails, to invade your privacy. Most websites do their best to invade your privacy from various tracking companies, in order to discover more about you.

Websites are like sausage: you don't want to see the messy tricks your beloved candidate is really doing behind the scenes.

Anyway, over the course of the coming election, I'll blog about use and misuse of email addresses. Four years from now, I'll probably write a post about how this crop of candidates has turned out. 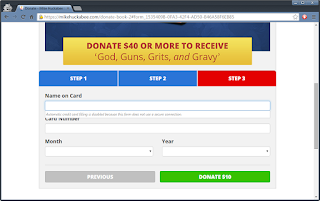 Did you sign up from every district? That is insane!

I hope you used different email addresses for each site, so you can see who sells your data to whom. An interesting project, I look forward to updates.

I've never heard someone call Lessig hateful. I'm genuinely curious why you think he is. Could you explain?

Did you give money to Jill Stein? I hope she finds a way to return it to you.

"yes, even the hateful ones like Trump and Lessig"

Huh? Care to qualify that statement?