Another lesson in confirmation bias

The biggest problem with hacker attribution is the confirmation bias problem. Once you develop a theory, your mind shifts to distorting evidence trying to prove the theory. After a while, only your theory seems possible as one that can fit all your carefully selected evidence.

You can watch this happen in two recent blogposts [1] [2] by Krypt3ia attributing bitcoin payments to the Shadow Broker hackers as coming from the government (FBI, NSA, TAO). These posts are absolutely wrong. Nonetheless, the press has picked up on the story and run with it [*]. [Note: click on the pictures in this post to blow them up so you can see them better].


The Shadow Brokers published their bitcoin address (19BY2XCgbDe6WtTVbTyzM9eR3LYr6VitWK) asking for donations to release the rest of their tools. They've received 66 transactions so far, totally 1.78 bitcoin, or roughly $1000 at today's exchange rate.

Bitcoin is not anonymous by pseudonymous. Bitcoin is a public ledger with all transaction visible by everyone. Sometimes we can't tie addresses back to people, but sometimes we can. There are a lot of researchers who spent a lot of time on "taint anlysis" trying to track down the real identity of evildoers. Thus, it seems plausible that we might be able to discover the identities of those people making contributions to Shadow Brokers.

The first of Krypt3ia's errant blogposts tries to use the Bitcoin taint analysis plugin within Maltego in order to do some analysis on the Shadow Broker address. What he found was links to the Silk Road address -- the address controlled by the FBI since they took down that darknet marketplace several years ago. Therefore, he created the theory that the government (FBI? NSA? TAO?) was up to some evil tricks, such as trying to fill the account with money so that they could then track where the money went in the public blockchain.

But he misinterpreted the links. (He was wrong.) There were no payments from the Silk Road accounts to the Shadow Broker account. Instead, there were people making payments to both accounts. As a prank.

To demonstrate how this prank wors, I made my own transaction, where I pay money to the Shadow Brokers (19BY2...), to Silk Road (1F1A...), and to a few other well-known accounts controlled by the government. 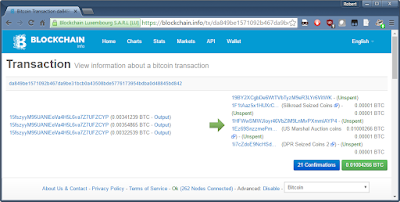 The point here is that anybody can do these shenanigans. That government controlled addresses are involved means nothing. They are public, and anybody can send coin to them.

That blogpost points to yet more shenanigans, such as somebody "rick rolling", to confirm that TAO hackers were involved. What you see in the picture below is a series of transactions using bitcoin addresses containing the phrase "never gonna give you up", the title of Rich Astley's song (I underlined the words in red). 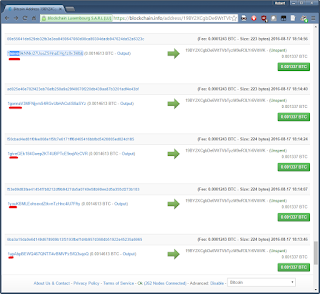 Far from the government being involved, somebody else took credit for the hack, with the Twitter handle @MalwareTechBlog. In a blogpost [*], he describes what he did. He then proves his identity by signing a message at the bottom of his post, using the same key (the 1never.... key above) in his tricks. Below is a screenshot of how I verified (and how anybody can verify) the key. 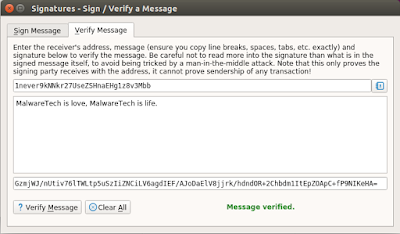 Moreover, these pranks should be seen in context. Goofball shenanigans on the blockchain are really, really common. An example is the following transaction: 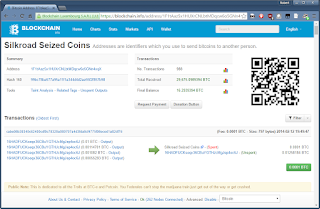 Notice the vanity bitcoin address transfering money to the Silk Road account. There is also a "Public Note" on this transaction, a feature unique to BlockChain.info -- which recently removed the feature because it was so extensively abused.

Bitcoin also has a feature where 40 bytes of a message can be added to transactions. The first transaction sending bitcoins to both Shadow Brokers and Silk Road was this one. If you tell it to "show scripts", you see that it contains an email address for Cryptome, the biggest and oldest Internet leaks site (albeit not as notorious as Wikileaks).

The point is this: shenanigans and pranks are common on the Internet. What we see with Shadow Brokers is normal trickery. If you are unfamiliar with Bitcoin culture, it may look like some extra special trickery just for Shadow Brokers, but it isn't.


After much criticism why his first blogpost was wrong, Krypt3ia published a second. The point of the second was to lambaste his critics -- just because he jotted down some idle thoughts in a post doesn't make him responsible for journalists like ZDnet picking up as a story that's now suddenly being passed around.

But his continues with the claim that there is somehow evidence of government involvement, even though his original claim of payments from Silk Road were wrong. As he says:


However, my contention still stands that there be some fuckery going on here with those wallet transactions by the looks of it and that the likely candidate would be the government

Krypt3ia goes onto then claim, about the Rick Astley trick:


So yeah, these accounts as far as I can tell so far without going and spending way to many fucking hours on bitcoin.ifo or some such site, were created to purposely rick roll and fuck with the ShadowBrokers. Now, they may be fractions of bitcoins but I ask you, who the fuck has bitcoin money to burn here? Any of you out there? I certainly don’t and the way it was done, so tongue in cheek kinda reminds me of the audacity of TAO…

Who has bitcoin money to burn? The answer is everyone. Krypt3ia obvious isn't paying attention to the value of bitcoin here, which are pennies. Each transaction of 0.0001337 bitcoins is worth about 10 cents at current exchange rates, meaning this Rick Roll was less than $1. It takes minutes to open an account (like at Circle.com) and use your credit card (or debit card) to $1 worth of bitcoin and carry out this prank.

He goes on to say:


If you also look at the wallets that I have marked with the super cool “Invisible Man” logo, you can see how some of those were actually transfering money from wallet to wallet in sequence to then each post transactions to Shadow. Now what is that all about huh? More wallets acting together? As Velma would often say in Scooby Doo, JINKY’S! Something is going on there.

Well, no, it's normal bitcoin transactions. (I've made this mistake too -- learned about it, then forgot about it, then had to relearn about it). A Bitcoin transaction needs to consume all the previous transactions that it refers to. This invariably leaves some bitcoin left over, so has to be transferred back into the user's wallet. Thus, on my hijinx at the top of this post, you see the address 1HFWw... receives most of the bitcoin. That was a newly created by my wallet back in 2014 to receive the unspent portions of transactions. While it looks strange, it's perfectly normal.

But the real issue is confirmation bias. He's developed a theory, and searches for confirmation of that theory. He says "there are connections that cannot be discounted", when in fact all the connections can easily be discounted with more research, with more knowledge. When he gets attacked, he's becomes even more motivated to search for reasons why he's actually right. He's not motivated to be proven wrong.


And this is the case of most "attribution" in the cybersec issue. We don't have smoking guns (such as bitcoin coming from the Silk Road account), and must make do with flimsy data (like here, bitcoin going to the Silk Road account). Sometimes our intuition is right, and this flimsy data does indeed point us to the hacker. In other cases, it leads us astray, as I've documented before in this blog. The less we understand something, the more it confirms our theory rather than conforming we just don't understand. That "we just don't know" is rarely an acceptable answer.

I point this out because I'm always the skeptic when the government attributes attacks to North Korea, China, Russia, Iran, and so on. I've seen them be right sometimes, and I've seem them be absolutely wrong. And when they are wrong, it's easy figuring out why -- because of things like confirmation bias.

I'll buy a glass of beer to that person from that forum who told me to visit your site. A huge thumbs up for you buddy.

Hi, after reading this awesome piece of writing i am as well delighted to share my familiarity here with colleagues. Keep up the great work.

If you are a dentist visit this link Dental Websites.