One of the basic skills of hackers is "doxxing". It's actually not a skill. All you need to do is a quick search of public records databases through sites like Spokeo, Intelius, and Ancestry.com and you can quickly dox anybody.

During the Republican convention, Trump's wife plagiarized Obama's wife in a speech. A person in the Trump organization named "Meredith Mciver" took the blame for it. Trump haters immediately leapt to the conclusion that this person was fake, pointing out her Twitter and Facebook accounts were created after the controversy started.

So I'm going to go all gamergate on her and see what I can find.

According to New York public records, somebody named "Meredith Mciver" has been working for a company called the "The Trump Organization" as "Staff Writer" for many years. Her parents are Phyllis and James Mciver. Her older sister is Karen Mciver. She has an apartment at  588 W End Avenue in Manhattan (though I won't tell you which apartment -- find out for yourself). Through Ancestry.com, you can track down more information, such as her yearbook photo from 1962.

Now, all these public records could be fake, of course, but that would require a conspiracy larger than the one hiding the truth about Obama's birth certificate.

I point this out because we have enough reasons to hate Trump (his populist demagoguery, his bankrupt character, his racism) and don't need to search for more reasons. Yet, conspiracy theorists, "mciverers", want to exploit this non-issue as much as they can. 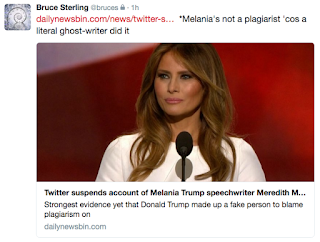 Always bash Trump, and be silent about Hillary's crimes.
Suddenly all the wars, the wipe out of Syria, support of police state, support of gun control, silencing of Bill's victoms, everything is ok.
Nice virtue signaling for your leftist friends.