tl;dr - Digital location data can be inherently wrong and it can be spoofed. Blindly assuming that it is accurate can make an ass out of you on twitter and when regulating drones. 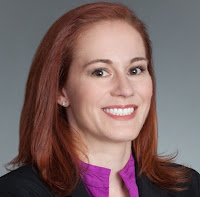 Guest contributor and friend of Errata Security Elizabeth Wharton (@LawyerLiz) is an attorney and host of the technology-focused weekly radio show "Buzz Off with Lawyer Liz" on America's Web Radio (listen live  each Wednesday, 2-3:00pm eastern; find  prior podcasts here or via iTunes - Lawyer Liz) This post is merely her musings and not legal advice.

Filtering through various campaign and debate analysis on social media, a tweet caught my eye. The message itself was not the concern and the underlying image has since been determined to be fake.  Rather, I was stopped by the140 character tweet's absolute certainty that internet user location data is infallible.  The author presented a data map as proof without question, caveat, or other investigation.  Boom, mic drop - attribution!

According to the tweeting pundit, "Russian trollbots" are behind the #TrumpWon hashtag trending on Twitter. 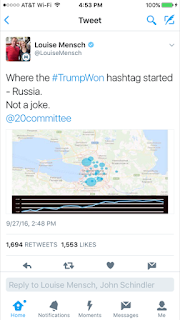 The proof? The twitter post claims that the Trendsmap showed the initial hashtag tweets as originating from accounts located in Russia.  Within the first hour the tweet and accompanying map graphic was "liked" 1,400 times and retweeted 1,495 times. A gotcha moment because a pew-pew map showed that the #TrumpWon hashtag originated from Twitter accounts located in Russia.  Boom, mic drop - attribution!

Except, not so fast. First, Trendsmap has since clarified that the map and data in the tweet above are not theirs (the Washington Post details the faked data/map ).  Moreover, location data is tricky.  According to the Trendsmap FAQ page they use the location provided in a user's profile and GeoIP provided by Google. Google's GeoIP is crafted using a proprietary system and other databases such as MaxMind.  IP mapping is not an exact art.  Kashmir Hill, editor of Fusion's Real Future, and David Maynor, delved into the issues and inaccuracies of IP mapping earlier this year.  Kashmir wrote extensively on their findings and how phantom IP addresses and MaxMind's use of randomly selected default locations created digital hells for individuals all over the country -  Internet Mapping Glitch Turned Random Farm into Digital Hell.

Reliance on such mapping and location information as an absolute has tripped up law enforcement and is poised to trip up the drone industry. Certain lawmakers like to point to geofencing and other location applications as security and safety cure-all solutions. Sen. Schumer (D-N.Y.) previously included geofencing as a key element of his 2015 drone safety bill.  Geofencing as a safety measure was mentioned during Tuesday's U.S. House Small Business Committee hearing on Commercial Drone Operations. With geofencing, the drone is programmed to prohibit operations above a certain height or to keep out of certain locations.  Attempt to fly in a prohibited area and the aircraft will automatically shut down.  Geofencing relies on location data, including geospatial data collected from a variety of sources.  As seen with GeoIP, data can be wrong.  Additionally, the data must be interpreted and analyzed by the aircraft's software systems.  Aircraft systems are not built with security first, in some cases basic systems security measures have been completely overlooked.  With mandatory geofencing, wrong data or spoofed (hacked) data can ground the aircraft.

Location mapping is helpful, one data point among many.  Beware of attribution and laws predicated solely on information that can be inaccurate by design. One errant political tweet blaming Russian twitter users based on bad data may lead to a "Pants on Fire" fact check.  Even if initially correct, a bored 400lb hacker may have spoofed the data.