What the Yahoo NSA might've looked for

The vague story about Yahoo searching emails for the NSA was cleared up today with various stories from other outlets [1]. It seems clear a FISA court order was used to compel Yahoo to search all their customer's email for a pattern (or patterns). But there's an important detail still missing: what specifically were they searching for? In this post, I give an example.


Investigators had learned that agents of the foreign terrorist organization were communicating using Yahoo’s email service and with a method that involved a “highly unique” identifier or signature, but the investigators did not know which specific email accounts those agents were using, the officials said.

What they are likely referring it is software like "Mujahideen Secrets", which terrorists have been using for about a decade to encrypt messages. It includes a unique fingerprint/signature that can easily be searched for, as shown below.

In the screenshot below, I use this software to type in a secret message: 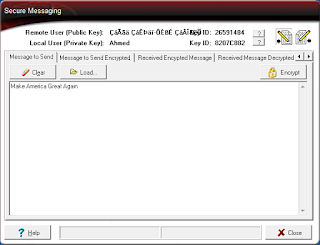 I then hit the "encrypt" button, and get the following, a chunk of random looking text: 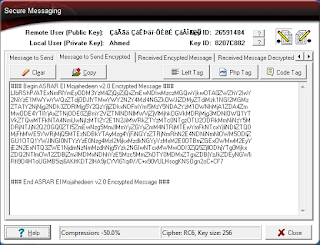 This software encrypts, but does not send/receive messages. You have to do that manually yourself. It's intended that terrorists will copy/paste this text into emails. They may also paste the messages into forum posts. Encryption is so good that nobody, not even the NSA, can crack properly encrypted messages, so it's okay to post them to public forums, and still maintain secrecy.

In my case, I copy/pasted this encrypted message into an email message from one of my accounts and sent to to one of my Yahoo! email accounts. I received the message shown below: 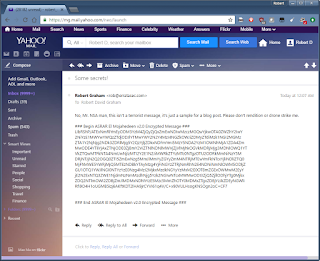 The obvious "highly unique signature" the FBI should be looking for, to catch this software, is the string:

Indeed, if this is the program the NSA/FBI was looking for, they've now caught this message in their dragnet of incoming Yahoo! mail. This is a bit creepy, which is why I added a plea to the message, in unencrypted form, asking them not to rendition or drone strike me. Since the NSA can use such signatures to search traffic from websites, as well as email traffic, there's a good change you've been added to their "list" simply for reading this blog post. For fun, send this blogpost to family or friends you don't particularly like, in order to get them on the watch list as well.

The thing to note about this is that the string is both content and metadata. As far as the email system is concerned, it is content like anything else you might paste into a message. As far as the terrorists are concerned, the content is encrypted, and this string is just metadata describing how the content was encrypted. I suspect the FISA court might consider content and metadata differently, and that they might issue such an order to search for this metadata while not being willing to order searches of patterns within content.

Regardless of what FISA decides, though, this is still mass surveillance of American citizens. All Yahoo! mail is scanned for such a pattern. I'm no sure how this can possibly be constitutional. Well, I do know how -- we can't get any details about what the government is doing, because national security, and thus we have no "standing" in the court to challenge what they are doing.

Note that one reason Yahoo! may have had to act in 2015 is because after the Snowden revelations, and at the behest of activists, email providers started to use STARTTLS encryption between email servers. If the NSA had servers passively listening to email traffic before, they'd need to be replaced with a new system that tapped more actively into the incoming email stream, behind the initial servers. Thus, we may be able to blame activists for this system (or credit, as the case may be :).

In any case, while the newer stories do a much better job at describe what details are available, no story is complete on this issue. This blogpost suggests one possible scenario that matches the available descriptions, to show more concretely what's going on.

If you want to be troublemaker, add the above string to as your email signature, so that it gets sent as part of every email you send. It's hard to imagine the NSA or GCHQ aren't looking for this string, so it'll jam up their system.