Uber was right to disable surge pricing at JFK

Yesterday, the NYC taxi union had a one-hour strike protesting Trump's "Muslim Ban", refusing to pick up passengers at the JFK airport. Uber responded by disabling surge pricing at the airport. This has widely been interpreted as a bad thing, so the hashtag "#DeleteUber" has been trending, encouraging people to delete their Uber accounts/app.

These people are wrong, obviously so.

Uber's "Surge Pricing" isn't price gouging, as many assume. Instead, the additional money goes directly to the drivers, to encourage them come to the area surging and pick up riders. Uber isn't a taxi company. It can't direct drivers to go anywhere. All it can do is provide incentives. "Surge Pricing" for customers means "Surge Income" for the drivers, giving them an incentive. Drivers have a map showing which areas of the city are surging, so they can drive there.

Another way of thinking about it is "Demand Pricing". It's simply the economic Law of Supply and Demand. If demand increases, then prices increase, and then supply increases chasing the higher profits. It's why famously you can't get a taxi cab on New Years Eve, but you can get an Uber driver. Taxi drivers can't charge more when demand is surging, so there's no more taxis available on that date than on any other. But Uber drivers can/do charge more, so there's more Uber drivers.

Supply and Demand is every much a law as Gravity. If the supply of taxi drivers is less than the demand, then not everyone is going to get a ride. That's basic math. If there's only 20 drivers right now, and 100 people wanting a ride, then 80 riders are going to be disappointed. The only solution is more drivers. Paying drivers more money gets more drivers. The part time drivers, the drivers planning on partying instead of working, will decide to work New Years chasing the surge wages.

Uber made the following announcement:

Surge pricing has been turned off at #JFK Airport. This may result in longer wait times. Please be patient.
— Uber NYC (@Uber_NYC) January 29, 2017

By turning off surge pricing, there would be no increase in supply. It would mean the only drivers going to JFK are those dropping off passengers. It would mean that Uber wouldn't be servicing any more riders than on a normal day, making no difference to the taxi strike, one way or the other.

Why wouldn't Uber stop pickups at JFK altogether, joining the strike? Because it'd be a tough decision for them. They have a different relationship with their drivers. Both taxis and Uber are required to take passengers to the airport if asked, but taxis are much better at weaseling out of it [*]. That means screwing drivers, forcing them to go way out to JFK with no return fare. In contrast, taxis were warned enough ahead of time to avoid the trip.

The above section assumes a carefully considered Uber policy. In reality, they didn't have the time.

The taxi union didn't announce their decision until 5pm, with the strike set for only one hour, between 6pm and 7pm.

Uber's announcement was at 7:30pm, half hour after the strike was over. They may not have been aware of the strike until after it started, when somebody noticed an enormous surge starting at 6pm. I can imagine them running around in a panic at 6:05pm, trying to figure out how to respond.

Disabling surge pricing is probable their default action. They've been down this route before. Every time there is a terrorist attack or natural disaster, and computers turn on Surge Pricing, somebody has to rush to go turn it off again, offer customer rebates, and so on for PR purposes.

Why doesn't the press report this?

Everyone knows Surge Pricing is evil. After all, that's what you always read it in the press. But that's because the press knows as little about basic economics as their readers.

A good example is this CNN story on the incident [*]. 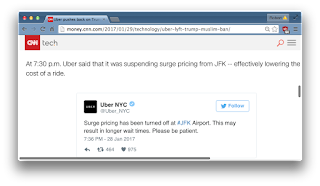 CNN describes this as "effectively lowering the cost of a ride". They ignore the reality, that this was "effectively lowering the supply of rides". Reading this, readers will naturally assume there's an unlimited supply ready to service the lower priced rides. What CNN fails to tell readers is that there is no increase in supply, that there can't be more rides than normal. They ignore the bit in the tweet that warns against longer wait times due to lack of supply.

The timing alone makes the #DeleteUber claims nonsense, as the strike was already over for 36 minutes when Uber tweeted. But in any case, Uber's decision not to do surge pricing did not "entice" customers with lower prices -- they would still have long waits (as the tweet says), causing a strong dis-enticement. No rational person could interpret this as Uber trying to profit from this event.

On the other hand, before this event, Uber announced it's opposition to Trump's action, and promised to help any of it's drivers adversely affected.


Update: The #deleteUber people are switching to Lyft, which continued to pick up passengers during the strike. Lyft is a company funded by Trump adviser Peter Thiel.
By Robert Graham

Depends on the elasticity of demand (for uber cars) vs supply (of uber cars), doesn't it? The author seems to be assuming that demand is infinite instead of supply, which is a similar assumption. In other words, if surge pricing wasn't cancelled, it is possible that consumers would have elected to take another mode of transportation or something.

Anyway, that's besides the point. Uber has publicly stated that their intent was that "We wanted people to know they could use Uber to get to and from JFK at normal prices, especially last night". So clearly the intent was not to intensify the strike.

I don't know enough to comment on the validity of your argument, but it seems reasonable.

Also, there is no need for he quotes around Muslim Ban.

"Supply and Demand is every much a law as Gravity." Brilliantly stated.
Unfortunately many of our elected officials don't seem to understand this.

I've driven for Uber. When surge pricing goes into effect, the drivers are paid the same commission percentage regardless of the surge effect. Uber takes 25% of the fare from the drivers, no matter how little or how high the surge effect is.

Jack, if there were infinite supply, there wouldn't be surge pricing.

Whatever Uber's intent was, they brought this on themselves by not making it clear with their original message.

It might be worth adding in the update about Lyft that Lyft has donated $1M to the ACLU as a response to the immigration order.

taxisincarlisle said...
This comment has been removed by a blog administrator.
11:20 AM