DEF CON is the largest U.S. hacker conference that takes place every summer in Las Vegas. It offers WiFi service. Is it safe?

The trick is that you need to download the certificate from https://wifireg.defcon.org and import it into your computer. They have instructions for all your various operating systems. For macOS, it was as simple as downloading "dc25.mobileconfig" and importing it.

I haven't validated the DefCon team did the right thing for all platforms, but I know that safety is possible. If a hacker could easily hack into arbitrary WiFi, then equipment vendors would fix it. Corporations widely use WiFi -- they couldn't do this if it weren't safe.

The first step in safety is encryption, obviously. WPA does encryption well, you you are good there.

The second step is authentication -- proving that the access-point is who it says it is. Otherwise, somebody could setup their own access-point claiming to be "DefCon", and you'd happily connect to it. Encrypted connect to the evil access-point doesn't help you. This is what the certificate you download does -- you import it into your system, so that you'll trust only the "DefCon" access-point that has the private key.

That's not to say you are completely safe. There's a known vulnerability for the Broadcom WiFi chip imbedded in many devices, including iPhone and Android phones. If you have one of these devices, you should either upgrade your software with a fix or disable WiFi.

There may also be unknown vulnerabilities in WiFi stacks. the Broadcom bug shows that after a couple decades, we still haven't solved the problem of simple buffer overflows in WiFi stacks/drivers. Thus, some hacker may have an unknown 0day vulnerability they are using to hack you.

Of course, this can apply to any WiFi usage anywhere. Frankly, if I had such an 0day, I wouldn't use it at DefCon. Along with black-hat hackers DefCon is full of white-hat researchers monitoring the WiFi -- looking for hackers using exploits. They are likely to discover the 0day and report it. Thus, I'd rather use such 0-days in international airpots, catching business types, getting into their company secrets. Or, targeting government types.

So it's impossible to guarantee any security. But what the DefCon network team bas done looks right, the same sort of thing corporations do to secure themselves, so you are probably secure.

On the other hand, don't use "DefCon-Open" -- not only is it insecure, there are explicitly a ton of hackers spying on it at the "Wall of Sheep" to point out the "sheep" who don't secure their passwords. 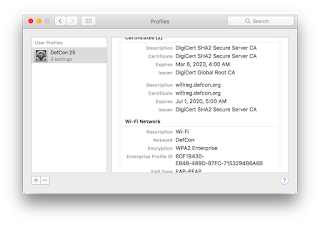