How to read newspapers

News articles don't contain the information you think. Instead, they are written according to a formula, and that formula is as much about distorting/hiding information as it is about revealing it.

A good example is the following. I claimed hate-crimes aren't increasing. The tweet below tries to disprove me, by citing a news article that claims the opposite:


Ugh turns out you're wrong! I know you let quality data inform your opinions, and hope the FBI is a sufficiently credible source for you https://t.co/SVwaLilF9B
— Rune Sørensen (@runesoerensen) November 14, 2017

But the data behind this article tells a very different story than the words.

Every November, the FBI releases its hate-crime statistics for the previous year. They've been doing this every year for a long time. When they do so, various news organizations grab the data and write a quick story around it.

By "story" I mean a story. Raw numbers don't interest people, so the writer instead has to wrap it in a narrative that does interest people. That's what the writer has done in the above story, leading with the fact that hate crimes have increased.

But is this increase meaningful? What do the numbers actually say?

To answer this, I went to the FBI's website, the source of this data, and grabbed the numbers for the last 20 years, and graphed them in Excel, producing the following graph: 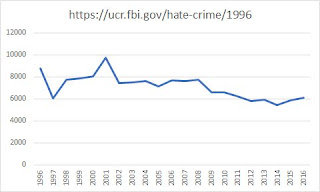 As you can see, there is no significant rise in hate-crimes. Indeed, the latest numbers are about 20% below the average for the last two decades, despite a tiny increase in the last couple years. Statistically/scientifically, there is no change, but you'll never read that in a news article, because it's boring and readers won't pay attention. You'll only get a "news story" that weaves a narrative that interests the reader.

So back to the original tweet exchange. The person used the news story to disprove my claim, but going to the underlying data, it only supports my claim that the hate-crimes are going down, not up -- the small increases of the past couple years are insignificant to the larger decreases of the last two decades.

Anyway, as a side-note, I'd like to apologize for being human. The snark/sarcasm of the tweet above gives me extra pleasure in proving them wrong :).

The best part of this is that the graph of hate crimes is exactly the same as the similar graph on crimes in general, down to the tiny increase the last two years and being well below the last few decades. So the people who say that hate crimes are up must agree with the evil Jeff Sessions about crimes in general. Oddly, they generally claim not to.

The truth is that they are just as wrong as Sessions and for the exact same reason.