Many of us are visiting parents/relatives this Thanksgiving/Christmas, and will have an opportunity to help our them with cybersecurity issues. I thought I'd write up a quick guide of the most important things.

1. Stop them from reusing passwords

By far the biggest threat to average people is that they re-use the same password across many websites, so that when one website gets hacked, all their accounts get hacked.

To demonstrate the problem, go to haveibeenpwned.com and enter the email address of your relatives. This will show them a number of sites where their password has already been stolen, like LinkedIn, Adobe, etc. That should convince them of the severity of the problem.

Write down passwords and store them in a safe place. Sure, it's a common joke that people in offices write passwords on Post-It notes stuck on their monitors or under their keyboards. This is a common security mistake, but that's only because the office environment is widely accessible. Your home isn't, and there's plenty of places to store written passwords securely, such as in a home safe. Even if it's just a desk drawer, such passwords are safe from hackers, because they aren't on a computer.

Write them down, with pen and paper. Don't put them in a MyPasswords.doc, because when a hacker breaks in, they'll easily find that document and easily hack your accounts.

You might help them out with getting a password manager, or two-factor authentication (2FA). Good 2FA like YubiKey will stop a lot of phishing threats. But this is difficult technology to learn, and of course, you'll be on the hook for support issues, such as when they lose the device. Thus, while 2FA is best, I'm only recommending pen-and-paper to store passwords. (AccessNow has a guide, though I think YubiKey/U2F keys for Facebook and GMail are the best).

You'll lose your phone at some point. It has the keys all all your accounts, like email and so on. With your email, phones thieves can then reset passwords on all your other accounts. Thus, it's incredibly important to lock the phone.

Apple has made this especially easy with fingerprints (and now faceprints), so there's little excuse not to lock the phone.

Note that Apple iPhones are the most secure. I give my mother my old iPhones so that they will have something secure.

My mom demonstrates a problem you'll have with the older generation: she doesn't reliably have her phone with her, and charged. She's the opposite of my dad who religiously slaved to his phone. Even a small change to make her lock her phone means it'll be even more likely she won't have it with her when you need to call her.

Make sure their home WiFi is WPA encrypted. It probably already is, but it's worthwhile checking.

The password should be written down on the same piece of paper as all the other passwords. This is important. My parents just moved, Comcast installed a WiFi access point for them, and they promptly lost the piece of paper. When I wanted to debug some thing on their network today, they didn't know the password, and couldn't find the paper. Get that password written down in a place it won't get lost!

Discourage them from extra security features like "SSID hiding" and/or "MAC address filtering". They provide no security benefit, and actually make security worse. It means a phone has to advertise the SSID when away from home, and it makes MAC address randomization harder, both of which allows your privacy to be tracked.

If they have a really old home router, you should probably replace it, or at least update the firmware. A lot of old routers have hacks that allow hackers (like me masscaning the Internet) to easily break in. 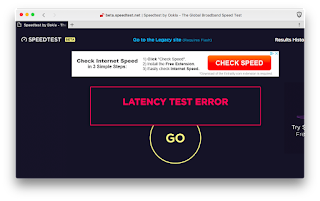 Most of the online tricks that will confuse your older parents will come via advertising, such as popups claiming "You are infected with a virus, click here to clean it". Installing an ad blocker in the browser, such as uBlock Origin, stops most all this nonsense.

For example, here's a screenshot of going to the "Speedtest" website to test the speed of my connection (I took this on the plane on the way home for Thanksgiving). Ignore the error (plane's firewall Speedtest) -- but instead look at the advertising banner across the top of the page insisting you need to download a browser extension. This is tricking you into installing malware -- the ad appears as if it's a message from Speedtest, it's not. Speedtest is just selling advertising and has no clue what the banner says. This sort of thing needs to be blocked -- it fools even the technologically competent.

uBlock Origin for Chrome is the one I use. Another option is to replace their browser with Brave, a browser that blocks ads, but at the same time, allows micropayments to support websites you want to support. I use Brave on my iPhone.

A side benefit of ad blockers or Brave is that web surfing becomes much faster, since you aren't downloading all this advertising. The smallest NYtimes story is 15 megabytes in size due to all the advertisements, for example.

Do backups, in the cloud. It's a good idea in general, especially with the threat of ransomware these days.

In particular, consider your photos. Over time, they will be lost, because people make no effort to keep track of them. All hard drives will eventually crash, deleting your photos. Sure, a few key ones are backed up on Facebook for life, but the rest aren't.

There are so many excellent online backup services out there, like DropBox and Backblaze. Or, you can use the iCloud feature that Apple provides. My favorite is Microsoft's: I already pay $99 a year for Office 365 subscription, and it comes with 1-terabyte of online storage.

You should have three email accounts: work, personal, and financial.

First, you really need to separate your work account from personal. The IT department is already getting misdirected emails with your spouse/lover that they don't want to see. Any conflict with your work, such as getting fired, gives your private correspondence to their lawyers.

Second, you need a wholly separate account for financial stuff, like Amazon.com, your bank, PayPal, and so on. That prevents confusion with phishing attacks.

Phishing warning! Fake emails are being sent out pretending to be from the US Postal Service, claiming that you requested your mail be held this week. Don't click on the attachment OR the links.
— Wendy Nather (@wendynather) November 21, 2017

Social media sites like Facebook, Twitter, and Google encourage you to enable "apps" that work their platforms, often demanding privileges to generate messages on your behalf. The typical scenario is that you use them only once or twice and forget about them.

A lot of them are hostile. For example, my niece's twitter account would occasional send out advertisements, and she didn't know why. It's because a long time ago, she enabled an app with the permission to send tweets for her. I had to sit down and get rid of most of her apps. 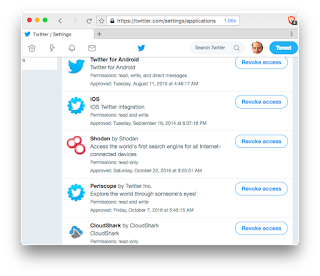 Now would be a good time to go through your relatives Facebook, Twitter, and Google/GMail and disable those apps. Don't be a afraid to be ruthless -- they probably weren't using them anyway. Some will still be necessary. For example, Twitter for iPhone shows up in the list of Twitter apps. The URL for editing these apps for Twitter is https://twitter.com/settings/applications. Google link is here (thanks @spextr). I don't know of simple URLs for Facebook, but you should find it somewhere under privacy/security settings.

I put this last because it can be so much work.

You should install the latest OS (Windows 10, macOS High Sierra), and also turn on automatic patching.

But remember it may not be worth the huge effort involved. I want my parents to be secure -- but no so secure I have to deal with issues.

For example, when my parents updated their HP Print software, the icon on the desktop my mom usually uses to scan things in from the printer disappeared, and needed me to spend 15 minutes with her helping find the new way to access the software.

However, I did get my mom a new netbook to travel with instead of the old WinXP one. I want to get her a Chromebook, but she doesn't want one.

For iOS, you can probably make sure their phones have the latest version without having these usability problems.

You can't solve every problem for your relatives, but these are the more critical ones.