Classic Bond villain, Elon Musk, has a new plan to create a website dedicated to measuring the credibility and adherence to "core truth" of journalists. He is, without any sense of irony, going to call this "Pravda". This is not simply wrong but evil. 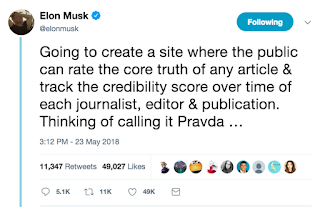 Musk has a point. Journalists do suck, and many suck consistently. I see this in my own industry, cybersecurity, and I frequently criticize them for their suckage.

But what he's doing here is not correcting them when they make mistakes (or what Musk sees as mistakes), but questioning their legitimacy. This legitimacy isn't measured by whether they follow established journalism ethics, but whether their "core truths" agree with Musk's "core truths".

An example of the problem is how the press fixates on Tesla car crashes due to its "autopilot" feature. Pretty much every autopilot crash makes national headlines, while the press ignores the other 40,000 car crashes that happen in the United States each year. Musk spies on Tesla drivers (hello, classic Bond villain everyone) so he can see the dip in autopilot usage every time such a news story breaks. He's got good reason to be concerned about this.

He argues that autopilot is safer than humans driving, and he's got the statistics and government studies to back this up. Therefore, the press's fixation on Tesla crashes is illegitimate "fake news", titillating the audience with distorted truth.

But here's the thing: that's still only Musk's version of the truth. Yes, on a mile-per-mile basis, autopilot is safer, but there's nuance here. Autopilot is used primarily on freeways, which already have a low mile-per-mile accident rate. People choose autopilot only when conditions are incredibly safe and drivers are unlikely to have an accident anyway. Musk is therefore being intentionally deceptive comparing apples to oranges. Autopilot may still be safer, it's just that the numbers Musk uses don't demonstrate this.

And then there is the truth calling it "autopilot" to begin with, because it isn't. The public is overrating the capabilities of the feature. It's little different than "lane keeping" and "adaptive cruise control" you can now find in other cars. In many ways, the technology is behind -- my Tesla doesn't beep at me when a pedestrian walks behind my car while backing up, but virtually every new car on the market does.

Yes, the press unduly covers Tesla autopilot crashes, but Musk has only himself to blame by unduly exaggerating his car's capabilities by calling it "autopilot".

What's "core truth" is thus rather difficult to obtain. What the press satisfies itself with instead is smaller truths, what they can document. The facts are in such cases that the accident happened, and they try to get Tesla or Musk to comment on it.

If "credibility" is the concern, then it's the classic Bond villain here that's the problem: Musk himself. His track record on business statements is abysmal. For example, when he announced the Model 3 he claimed production targets that every Wall Street analyst claimed were absurd. He didn't make those targets, he didn't come close. Model 3 production is still lagging behind Musk's twice adjusted targets.


So who has a credibility gap here, the press, or Musk himself?

Not only is Musk's credibility problem ironic, so is the name he chose, "Pravada", the Russian word for truth that was the name of the Soviet Union Communist Party's official newspaper. This is so absurd this has to be a joke, yet Musk claims to be serious about all this.

Yes, the press has a lot of problems, and if Musk were some journalism professor concerned about journalists meeting the objective standards of their industry (e.g. abusing anonymous sources), then this would be a fine thing. But it's not. It's Musk who is upset the press's version of "core truth" does not agree with his version -- a version that he's proven time and time again differs from "real truth".


I stole the title, with permission, from this tweet:

Perhaps you should go with www.nepravda.com (translates to "Not true").

Greg, it is more profound to use "krivda" word here that means "crooked truth". As it's much more close to what the mass media do: get a fact, then distort it and publish.