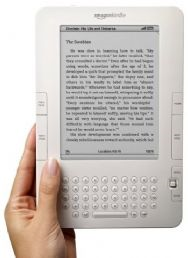 Amazon has refreshed their 'electronic book' device, the Kindle 2. I feel that all the reviews of this device suck, failing to capture what I find important about the device.

Most reviews point out that the screen reads "just like a paper book". This is because the screen uses a unique "e-ink" technology that is nothing like what you get with computer screens. It is like paper because you read it using reflected ambient light, just like a book.

Unfortunately, the contrast sucks, and the update speed is slow. Whereas books are black ink on white paper, e-books are dark-grey text on light-grey background (the picture of the Kindle shows a better contrast than what you'll actually get). This makes e-books hard to read in low light conditions. It can take from 0.5 to 2.0 seconds to refresh the screen. This makes "flipping through pages" maddening slow, and makes it hard to navigate. Thus, while reading a book from beginning to end (like a novel) works well, reading other content (like textbooks) is too painful.

The Kindle 2 dramatically improves the updates speed, but at the cost of contrast. It appears to my untrained eye that the contrast is worse, that the background is a little bit darker, and the text a little bit lighter. This may simply be an artifact of the new grey scales. The older unit had 4 levels of grey, the new unit has 165 levels of grey. This is used to improve the anti-aliasing of the fonts. Just as on a computer screen, anti-aliasing fonts makes their outlines a bit fuzzy. Thus, while it looks like contrast is worse to my eye, this make be an artifact of the anti-aliasing. I whish there was a way to turn it off.

I have been using the old Kindle now for about a year, so I know it works. I read several books a month on it. I read both fiction and non-fiction. My favorite fiction is science fiction. Most of the non-fiction books are those that appear on the New York Times best-seller lists - even if I don't like a book, I'll by it and read it because it's the sort of thing everyone else has read.

I "speed read" well on the Kindle. There is no such thing as true speed reading of the sort you might see advertised (it's just a magic trick when people speed read), but there is an art to digesting text. For example, if you skim this post, you can read the first sentence of every paragraph and get the gist of what I'm saying. You can pick and choose which paragraphs you want to read fully, and which ones you want to skip. The slow page flipping speed on the old Kindle was a minor hindrance to this, but the faster speed of the new Kindle works much better for this. Another way of digesting text, by starting from the Table of Contents and reading the book hierarchically, is still painfully slow, though, although much improved from the older Kindle. I still buy paper text books, or PDF versions.

Reviewers focus on paper books as the main competitor, but the Kindle's true competitors are products like the iPhone. My brother has been reading e-books for years, first on the Palm Pilot, and now the iPhone. I, too, have an iPhone, so why should I purchase a Kindle? One reason is battery life. I go on long trips where I'm likely to burn through any battery powered device. E-ink devices like the Kindle do not use battery power to keep the screen up, allowing you to spend days continuously reading books before they run out of a power. Another factor is that I do like seeing a lot of content on the screen at the same time.

What distinguishes the Kindle from similar e-book readers is its "Whispernet" technology. Amazon includes an EVDO cellphone inside the Kindle that connects to the Internet. When you purchase a book, it downloads across the network within seconds. There are a lot of other e-book readers based upon the same e-ink technology, but they don't have something like Whispernet, which I think is a fatal flaw. I tried out the Sony e-book and hated it. The Sony store sucked, and the process of downloading first to my computer then transferring purchases across USB to be too painful. It simply wasn't worth my time. I can browse for books on Amazon either from my computer or from the Kindle, but when I hit "purchase", the book is delivered to my Kindle within seconds, ready to read.

I pack at the last minute for business trips; this works well with the Kindle. I can just throw the Kindle in the bag and worry about purchasing a book AFTER I've boarded the airplane.

The Kindle is exercise equipment for the mind. You should be reading books. My brother, who I mentioned as having been reading e-books forever, is a much more interesting person to talk to than you are. It's partially because he thinks independently about the books rather than mindlessly regurgitates what he reads, but it's mainly because he reads a lot. Reviews of the Kindle often include the qualification "if you read books" rather than pointing out "you should read books".

If you have the old Kindle, should you upgrade to the new Kindle 2? Probably not. Whether or not you like the Kindle depends a lot of nearly insignificant factors. My sister liked the original Kindle, but never used it because she couldn't hold the device without accidentally pressing buttons to turn the page. The new Kindle fixes that problem. I, on the other hand, don't like the contrast of the new Kindle and may go back to the old one. Although, the faster page flipping (20% faster) is very nice, and makes navigation a lot easier.

In summary, the Kindle has changed how I read books. It's not simply a gadget I play with, but something I spend many hours with every week. The new Kindle is a slightly better than the old one.
By Robert Graham

My biggest concern about the Kindle, aside from it’s weird, book-buring-esque name, is that it compromises the integrity of the written word. A printed book may be unwieldy, but you know that once it’s on your shelf, not one letter is going to change. Can’t say the same for the Kindle.

Also, when I spill coffee all over a book, I’ve only ruined that particular book :)

Awesome battery life, awesome contrast + bright enough backlight + fast screen updates; that is why I call it "the device from the ancient civilization" since most of the more modern ebook readers don't even come close...

compromises the integrity of the written word.

A "National Security Letter" (NSL) cannot force Amazon to remove an offending passage. The censorship issue with the NSLs was that they had a "gag" provision that forbade you to tell people you received one. That gag provision has been found unconstitutional.

The Sony PRS-505 is the best E-book Reader on the market. I have well over 1800 books on it and don't have to worry about the format of my ebooks because they can be PDF, LRF, etc. When I download white papers, and other documents I can take them with me on my 505. Sony does need to figure out how to build a device that can download content other than via USB but I will take an open format over wifi.

The Kindle is a nice device but being locked into one format and having only one way to get books is archaic. Once they open the Kindle up maybe it will be a viable option.

The Kindle does not lock you into one format. It supports a wide range of other formats. I would bet than any document you have on the Sony could be read by the Kindle.

In any event, there is no such thing as a "best product" (in any category). Every product consists of tradeoffs that appeal differently to different customers. I also own a Sony PRS-505, but I don't like it. I would rather read things on my laptop than mess with the Sony.

Excellent review Robert. I didn't realize that the new Kindle has worse contrast ratio. That would certainly put a much bigger strain on the eye. I think e-paper is definitely the way of the future, but that day is not today. Until everyone has an affordable e-paper reader and they're cheap enough to literally give away at trade shows like they do with USB memory sticks, e-paper will not replace real paper. Today if you buy a library of books, you can loan out thousands of books to thousands of people and they can all read it at the same time. The Kindle is only one device and it costs as much as 360 printed books.

Furthermore, the quality needs to go up substantially. Offset printing prints at either 1200 or 2400 DPI and the contrast ratio far superior to the Kindle. Even for graphics that rely on dithering an 8x8 block of pixels to simulate 64 shades of gray, that still works out to 150 DPI or 300 DPI of 64-shade gray pixels. But black text or lines get to take full advantage of the 2400 DPI which results in razor sharp edges without the need to use any sort of anti-aliasing.

I find my new kindle 2 very hard to read. I have had to get new glasses and brighter lights in my bedroom, but I still am getting headaches and eyestrain from trying to read it. Is there a way to make the letters darker or the background lighter? I am very frustrated with the device and am seeking a way to return it and get refunds on the "books" I purchased.