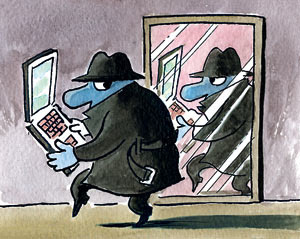 As I blogged, that WSJ story on cybespies was crap. However, that story had "legs". When a story gets attention, other news organizations jump on it and create their own version of the story. You can see similar stories, like these from the BBC, Reuters, and CNN.

So, each journalist had to make their own ethical decision. It's obvious that the public wants to read about the story, so do you feed the public's appetite, or do you stand up for ethics and quality news? Most organizations made the wrong decisions. CNN's version of the story is probably the most reasonable: they tracked down the original anonymous guys making the claim, and then did their research debunking the claims. CNN also used the correct word "hackers" whereas everyone else used the misleading word "spies". (hackers hint independent people, spies implies people who work directly for their governments).

However, it is The Economist that made the best choice in their version of the story, where they point out what all the other journalists knew:
But the most likely explanation for the sudden spate of scare stories is rather more mundane: a turf war between American government agencies over who should oversee the nation's cyber-security.

I highly recommend The Economist weekly news magazine. It is the most intelligent source of mainstream news available. Other sources like the New York Times or Newsweek or cable news channels target a dumber audience and consequently have dumber news, The Economist targets a more educated audience.

As a side note, I'm disappointed that the news organizations didn't contact any pentesters who had broken into power grids (such as myself).
By Robert Graham

I also recommend the Financial Times.

I love the media for its ability to guarantee my job security, but I hate the FUD they spread. In theory, any machine that has ever been giving a tracking cookie, has been compromised according to them.

Just thought that I'd mention that The Economist is not the only news source which made these observations, in fact Wired.com was making the same observations about the issue: http://www.wired.com/threatlevel/2009/04/put-nsa-in-char

It's the same reason you turn on the news and see murders, rapes, accidents, fires and never hear about the positive things that happened that day - because people only have a morbid curiosity to the dark side, and I'm willing to bet they don't really care if it's true or not.