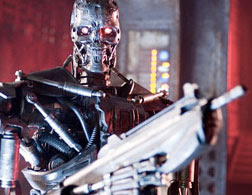 I'm reading this Slate article about whether you should be worried about robots eventually taking over. The author of that article has a "Harvard Ph.D. in security studies" and "helped write the new president's defense policy agenda". The article was disappointing.

The point he misses is that today's robots are not autonomous. The "Umanned Aerial Vehicles" (UAVs) dropping bombs in Afghanistan still have pilots, it's just that the pilots are located at a military base safely in a bunker rather in the vehicle itself. They don't make decisions to drop bombs, those decisions are likewise made by people, then remote signals sent to the UAV to drop them.

What we have today is not "robotics" so much as "telerobotics". They aren't mechanical soldiers so much as remote tools used by human soldiers -- soldiers who are not in harms way.

I'm an investor in a company that makes remote controlled guns that can, among other things, be controlled through the Internet. They sell them to the military. One of the main features is how and when these devices will actually fire a weapon.

The next level of telerobotics is "programmed response". My companies telerobitic guns have the feature where they can remember scans of the environment, and if something appears in the environment that doesn't belong there, the guns will swivel around, aim at the object, and shoot it. Yet, this still a sort of telerobotics: while the device itself chose to shoot, it did so on precisely programmed responses. It's still humans in control, with the robotics doing precisely what they are told to do.

I've walked past one of these units and had the gun slowly swivel as it followed me across the room. It's a bit unnerving. You do get a Terminator-like, sinister feeling about the device, yet, there is no intelligence lurking back there. It's just following lines of code.

When the robots rise up and enslave us, they won't be the military robots, but our personal robots like washing machines, toasters, and cars. The military is a bunch of control freaks. They don't like the idea of anything, not even their own soldiers, making decisions on their own.

Finally, I'd like to point out that this problem is "AI-complete". The robotic revolution requires artificial intelligence (AI), and if we ever perfect AI, we'll have a lot more to worry about than the errant robot.
By Robert Graham

"It's just following lines of code" - Actually this is what makes me even more worried than if the telerobot were actually intelligent.

What did you mean on your closing sentence?

AI is the future

Killer robots? Boring. Sexy android love slaves, now that's something. Think an army of Blade Runner-era Sean Youngs and 7 of 9's (if you're into that sort of butchy chick in a leotard thing), programmed to serve your every need, plus straighten up the apartment. Sort of a life-size, curvy Roomba that gives blow jobs.

Varun, no worries, computerized vision is still Really Really Hard, especially the recognizing concealed things bit. Or it's just tracking motion, which... isn't really new, although I have to admit I'd be unnerved at being tracked by anything remotely resembling a firearm too.

I wouldn't hold my breath on strong AI, but I'd agree with Robert that I'm more worried about Maximum Overdrive than I am Terminator.

Good points Rob. I believe that if people are worried about robots undermining them and ultimately proliferating a robotic rebellion against humanity they need to first and foremost be worried about those fellow humans who'd right the code to exploit the systems to begin with.

I've said it before and I'll say it again. The machines will win when plausible humanoid sexbots come out of beta.

"But master, why don't you just let me manage your hedge fund today? Just give me your credentials and your auth tokens, and I'll take care of your trades with my spare cycles, and we can crawl right back in to bed..."

When I can pick up an Ana Beatriz Barros Bot at Costco, 6 months no interest? Game over.