Xmas: to Kindle or not to Kindle 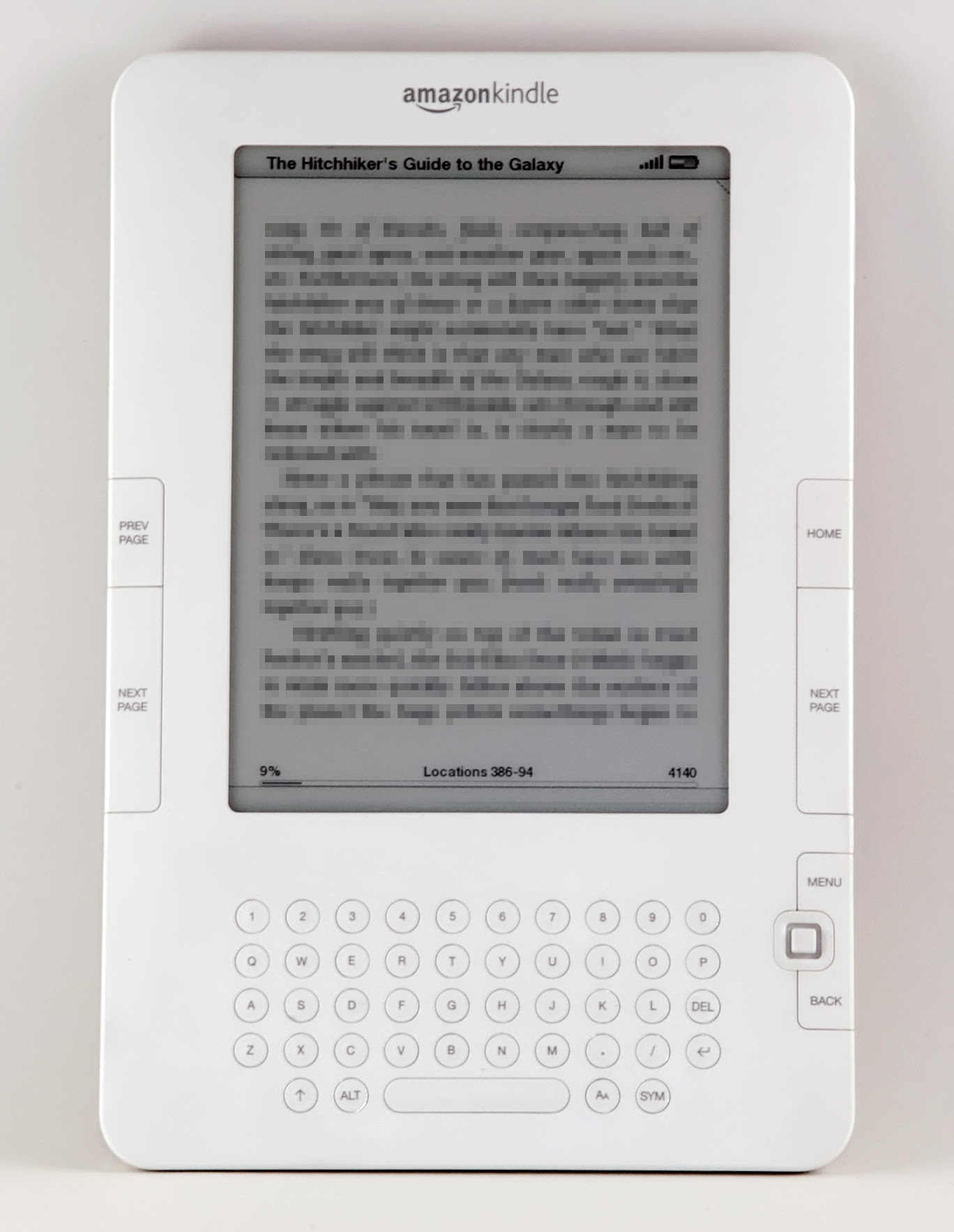 Xmas is coming up quick, and people are asking me whether they should get eBook readers as a present, specifically the Kindle.

First of all, if they don't read at least one book a month, then it wouldn't be a good gift. It's like exercise equipment: if you don't already exercise, then getting exercise equipment won't make you exercise. Getting somebody a Kindle won't make them start exercising their brain.

Assuming they are an avid reader, then the next question is what kind of reader to get them. My brother has been reading eBooks for a decade, first on his Palm Pilot, and now on his iPhone. There are lots of alternatives to “eBooks”.

You should understand the limitations of eBooks based on eInk. The most important is that the screen sucks and is slow. The text is a dark-grey on light-grey. It works pretty well in bright light, but not in dim light. Flipping pages takes a large fraction of a second. Navigating is slow.

You should also understand the difference between the Kindle and competing products. The Kindle includes “Whispernet”, which connects through mobile phone networks. The other other eBooks don't have that feature (yet). There is also the issue of availability, eBooks are likely to arrive on Amazon's Kindle store before other stores.

I had tried the Sony eBook reader a while ago. I never used it. The Sony store sucked, and transferring books over USB was a painful extra step. The Kindle is like the iMac of eBooks – it works without having to fuss with it. The next version of Sony's device is supposed to have a mobile phone connection, but I'm satisfied with the Kindle.

The morning that Dan Brown's latest novel came out, people were lining up in the morning waiting for the book stores to open. I, however, had already downloaded and read it starting at midnight. When a major book like that appears, Kindle users will get the book first. It's awesome.

When getting on a plane, I accidentally left my book in my checked luggage. No problem. I quickly downloaded and installed the Kindle app on my iPhone, downloaded a copy of the book from Amazon (free), and CONTINUED READING WHERE I HAD LEFT OFF ON THE KINDLE. I could also have used the Kindle app for Windows.

When going on a trip for a week, I stick the Kindle in my bag WITHOUT A CHARGER. If I turn off the mobile radio, it'll likely last the entire time without needing a charge. Otherwise, I could've borrowed a mobile phone charger (it uses a standard plug), or used my iPhone/laptop.

Sometimes, I shop for books directly from the Kindle (over the mobile phone connecting back to Amazon's store). Sometimes, I shop from my PC. I just browse for books as normal, but instead of buying the book, I click on “get Kindle edition”. By the time I walk over and pick up the Kindle, my new purchase has already been downloaded over Whispernet. It's much cheaper. People estimate that if you buy three books a month for a year, the Kindle pays for itself.

There is another cool feature: multiple eBooks per account. I actively use 3 (Kindle, iPhone, laptop). When I upgraded to the latest Kindle, I loaned out the old Kindle to a friend who is an avid reader, who reads the books I've already read, and buys more on my account (she buys vampire books, which screws up the “suggested for you” books).

Lastly, I also read The Economist on the Kindle, which rocks.

I have a bunch cybersecurity books on the Kindle. I had intended to get the relavent authors to sign my Kindle (since, of course, I don't own the physical book, they can't sign it). Unfortunately, I've missed the past few conferences, and the only author I've been able to physically get near has been Adam Shostack

The last problem you need to worry about it DRM. When you buy a book from Amazon, you are stuck reading the book on Amazon's devices. You can't move purchases to a different eBook reader. I've purchased about $1000 worth of content (174 items), and I can never read them on anything else (although I could just reverse engineer the DRM, but is that worth $1000 of my time?). That may be a deal breaker for you.

In summary, the Kindle will probably be either a device people love and use constantly, or a device that joins the trash heap of other unused gifts. I suspect a lot of Kindle/eBook-readers will be purchased this holiday season, but that most will turn out to be duds, but that some few people will love the gift.
By Robert Graham

Actually, the DRM has already been reverse engineered. In fact, the DRM for all major e-book formats has. But the e-book format sucks pretty hard formatting-wise and is not the EPUB format every other e-book device and bookseller is moving toward. Pretty much all Amazon and the Kindle have going for it is current majority market share.