Kindle DX vs. the iPad 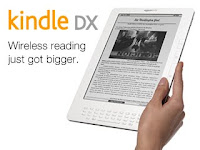 I just got the large screen version of the Kindle ("Kindle DX"), and spent the last day reading on it. It makes daily reading, especially magazines, more comfortable. However, it's larger/heavier, so I'll still take my smaller Kindle on trips

The new device came labeled "Robert's 6th Kindle". My first two Kindle's were versions 1 and 2 of the device, the other three are the software readers on my iPhone, notebook, and desktop. Presumably, once I get the iPad in two months, that will be my 7th Kindle tracked by Amazon.

The fact that I have some many Kindles reinforces the fact that it's a "cloud book library" and not a device. I have 168 items in my library. Many have described the Apple iPad as a competitor to the Kindle, but the opposite is true: Amazon is in the business of selling books, it'll happily sell you a book for your iPad, and store it in your cloud library.

The devices have different trade-offs. The Kindles use "e-ink" technology that requires no power to maintain its state. Thus, the device wakes up to redraw the page, then goes back to sleep while you read it. This means it has fantastic battery life, going for a week between charges even under heavy use. The iPad, though, will only go 10 hours between charges. Because of the battery life, I'd rather travel with my Kindle than an iPad.

Another trade-off is screen refresh. It takes about a half-second for the Kindle device to update the screen. This makes navigating the device painfully slow. It's a minor tradeoff when reading books from start to finish, but is painful when navigating a college textbooks. And, of course, the Kindle lacks touch screen, which makes navigation even worse. Amazon created the Kindle DX for colleges, but in my experience, it sucks. The iPad will be much better.

Another problem is PDFs. I plugged the Kindle into my computers, where it appeared as an external drive. I dragged-n-dropped some PDFs over to the Kindle to read them. Some worked fine, but others didn't. The problem is that the DX forces a PDF to be scaled at 100%, one page per screen. You can't zoom in or out. In some cases, the font was too small to be legible, and there's just no fixing that. The iPad handles PDFs much better.

Humorously, the first thing I read on the Kindle DX was the latest The Economist magazine that has picture on it's cover showing Jobs' new iPad. Reading magazines on the larger Kindle is much easier, due to the difficulty of reading images.

The DX is my new primary device for reading books and magazines. I read roughly 2 magazines a week and one book every two weeks, so that's quite a bit of time I'll be spending with the device. However, in two months, that might change again when I get the iPad, and read Kindle books from that device instead.

By the way, I think the iPad will be about as successful as the Mac Mini: not a failure, but not a runaway success either. I believe the keyboard is just too important to give up, and that there will never be a replacement (not voice recognition, not touchscreens, not anything). On airplanes, I see a lot of laptop computers and Kindles, I doubt I'll be seeing tablet computers (the iPad or the coming crop of competitors) displacing the laptop.
By Robert Graham

I would think that an airplane would be the perfect place where thi iPad excels, especially in coach. If you want to read, review docs, author docs, and keep up on email, you'd need both you kindle & your laptop OR just an iPad.

Laptops with someone reclining the seat in front of you is almost unusable in coach. The iPhone, while an incredible device, requires incredible trade offs because of its size. The iPad (for business travel) hits the sweetspot delivering real utility and the personalized distraction and entertainment of an iPod Touch.

Best review so far on the subject. You're right: it's all about the cloud book library.

I own the smaller kindle, and have wanted a second kindle in the family in order to share books with my wife. I'm probably going to buy an iPad instead of the DX, and see how that goes.

Random book suggestion - great kindle book for $0.99, and one of the more entertaining cyber punk representations of hacking and cyber defense that I've read in a while:

Can you write a sequel? Now you have an ipad, which do you prefer?

I have a Kindle DX and I am happy with it. It is easy on the eyes, and light to carry. The lack of features that the iPad has means I am not distracted and do a lot of reading, including a lot of scientific papers.

I plan to get the iPad but I do not think the choice is either or. Rather with limited finances what is more essential for you. If reading is large part of your job, get a kindle.