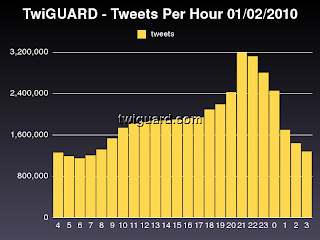 Special events like the football playoffs, awards shows, and politics can been seen in the twitter post statistics Twiguard collects. We can normally see some sort of spike, with the Grammys being no exception. We recorded 3.2 million tweets in a single hour which is way above the average of around 1.4 million tweets. To the left is a chart from 3am on Feb 1 showing the last 24 hour of tweet data we collected.

Malware authors often take this as a chance to spread new malware advertised as a link to something about the event. Normally we flag about 8% of Twitter traffic as spam or malware. Last night during the highest hour of tweets that number skyrocketed to almost 22%.

Just thought the stat was interesting.
By David Maynor