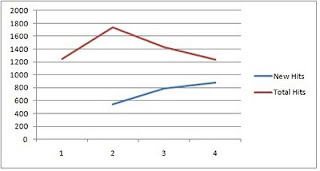 Although this update was a little late the analysis ran at the correct time and produced its results. 1239 bad urls in the list with 876 of them being new. That is almost 70%. The chart to the left shows the progression from week one of total flagged URLs in red with the unique URLs that week in blue. After 4 weeks they almost intersect and at this rate I am guessing that they will intersect in the next few weeks. This goes along way to showing that URL blacklisting alone is not fast enough to stop a spread on malware on a social network like twitter.

There are alot of reasons that can explain the numbers with one being that although we captured the URL weeks ago it didn’t start hosting malware until recently. Keep in mind though that the purpose of this experiment is to judge how quickly traditional blacklists can respond to malware spread with Twitter. Although Safe Browse may have flagged a URL as bad this week that doesn’t mean it was serving malicious content when it was first captured by Twiguard. In this experiment the majority of bad urls captured (58.6%) are hosted in Brazil. On Sunday the 7th twiguard will capture another 24 hours worth of URLs and make them available to anybody who wishes to duplicate this experiment.
By David Maynor