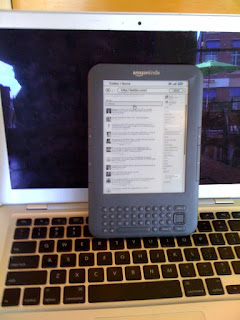 I'm a bit excited by this. I just got back from taking my nieces to Tokyo Disneyland, with the older Kindle. The older Kindle doesn't work internationally, so I couldn't sync up new content (like the latest edition of the Economist). I carried the device through Disneyland while waiting in line, or waiting for kids to get off rides. While the older device was small (and fit in the pockets of my cargo shorts, albeit uncomfortably), the smaller size of the newer device would have been welcome.

I tried out the new WebKit browser (which is the same code as the web browser on the iPhone). It works much better, though browsing is still slow. You can do it in emergencies, but you wouldn't want to browse the web with it. The screen shot shows a picture of the Kindle with the Twitter page open, compared to the size of the notebook computer.

The problem with the web-pages (and rendering PDFs) is that it tries to render them full-screen. There is no zoom and scroll feature like the iPhone. Moreover, web-sites don't have any clues that it's a mobile device, and don't know to change the content they deliver. The User-Agent is the following:

Hopefully more sites will figure out how to deal with it, but none of the websites I went to (Twitter, Slashdot) could figure it out.

Also, Twitter had a problem. It opens links in a new window/tab. That doesn't work on the Kindle. So, when clicking on links in Twitter, I just got an error message.

Of course, you aren't suppose to be surfing the web using the Kindle, so these criticisms don't matter much.

The main competition for the Kindle isn't dead tree books, but other devices. The Kindle apps on the iPad, smartphones, and notebook computer are fantastic. The reason you want the Kindle device instead is that its battery lasts forever, the mobilephone connection works everywhere for free, and you can read it in bright sunlight.

I don't think other book readers, like Sony, Barnes-and-Noble, or Apple's bookstore, are good competition. They all have roughly the same content, but Amazon keeps innovating faster than they do.

What interests me most about the latest version is that it's a good competitor to the OLPC, the "100 dollar laptop". The OLPC never worked, it costs $200 to build, and is so flaky that it fails to live up to its promise. The Kindle, on the other hand, works awesomely well. I'd like to see Amazon do some pilot projects, giving these to (older) kids in the third world with easy access to appropriate content for them. This would include both free educational content, as well as low "micropayment" content (books for 25 cents) generated especially for them. Imagine a teacher in the third world creates a mathematics textbook, sells it for 10-cents each, and then sells 10,000 copies of it to students with Kindle-like devices.

My sister dislikes the Kindle device, but instead reads books on her iPad (using the Kindle app). She's a more casual reader anyway.

My brother is a heavy reader. But, he's been reading e-books since the first Palm devices over 10 years ago. He's comfortable with that form factor, and would prefer to just use his smartphone to read e-books rather than a Kindle.

I have friend who reads heavily. She prefers the Kindle device over a smartphone or computer app.

My technophobic mother, who hates gadgets I get her, is a heavy reader. I gave her my original version 1 Kindle (after I purchased the version 2) to see if she could handle the technology. I'm now buying her this new version 3 Kindle. This is mostly because she travels a lot to other countries. I like the idea that she's always got a device I can transfer files to.

I read on the iPad at home at night (Kindle device sucks a low light), but use the Kindle device in most other situations. It's the second most important thing I make sure I have when traveling (after my cellphone).

All of these are on the same account. While everyone buys different books they want to read on the account, we occasionally read each other's books.

The Kindle is only interesting if you travel a lot, or read a lot. It probably sucks for everyone else. However, if that matches you, I think you'll like it a lot.
By Robert Graham

"The Kindle is only interesting if you travel a lot, or read a lot. "

And if you don't have an extensive library that you like to re-read or are willing to repurchase all those books in e-book format. And if you always buy your books new instead of used and don't generally borrow/lend books as a way of getting reading material that you'll only read once for less than cover price.

I read a ton and I would love to not have to carry paper, but I'm stuck with it till at least some of those issues are fixed or I get rich enough that I don't mind re-buying every title I already own and love.

As for sharing, my entire family is on one account, which means we get to read each other's books.

My mom really wants a Kindle DX because she needs larger text to be comfortable for her eyes. But those are in the mid $300 range and I'm a cheap a$$ and I don't like to pay that much for just an e-reader.

I might get her to agree to the upcoming 10.1" Archos Android device which seems to be a lot more useful to me. She wants the size more than anything.

A 10.1" 1024x600 LCD when using sub-pixel rendering effectively has 3072x600 resolution. I'd really love it if it used the Pixel Qi technology. That seems to be the most reasonable hybrid with the best of all worlds.