A False Sense of Security 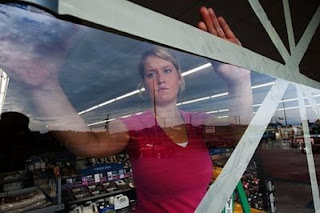 This article describing Hurricane Earl shows a woman putting a pattern of duct tape on the window. Does this duct tape really help?

What it does give people is a false sense of security. For whatever reason, they’ve decided not to buy hurricane shutters (even though they live in a hurricane zone) and not board up their windows with plywood. But they can’t just do nothing, so they resort to sympathetic magic like taping up windows. At least they are putting something on their windows.

Such ignorance is not just useless, but in some cases, can be harmful. Some people believe they should leave their windows open a crack during a hurricane, in order to equalize pressure. The opposite is true: this makes it more likely that the hurricane will pop your roof off. The reason is that wind traveling over your roof creates low pressure above, and wind entering your house creates high pressure inside. This lifts your roof off, in precisely the same manner it lifts an airplane wing when flying.

There are obvious analogies with cybersecurity. People do things, like install anti-virus, firewalls, or WEP, because “doing something” makes them feel good. But they haven’t thought through the cause-and-effect whether doing such things actually work.
By Robert Graham

This is so true...this is hiding your head in the sand like a ostrich and never think about it any more. Problem is sooner or later it will hit you in the face pretty hard.

Taping windows like that decreases the damage done by a shattered window. The shards of glass are less likely to go flying and cause injury.

@SamQuigley:
Nope. The star pattern shown in the picture does essentially nothing to stop shards of glass flying about, because it leaves most of the window uncovered. Only if you covered the window 100% in tape would you have any measurable effect, and even then, shards of glass still go flying (duct tape tears easily).

Don't stand near a window during a hurricane, even one covered in tape.

since they know the glass will break no matter what they do, their risk is not in the glass breaking but in the liability they incur when somebody gets hurt. If this is the minimal effort required to prove they did 'something' to prevent hurt and have their insurance contract cover potential damages the behaviour is nothing more than logical.

which is why the IT department and CIO need visibility into every single endpoint in real time.