Here is an awesome site for viewing the map of undersea cables: http://www.cablemap.info/

Undersea cables are interesting. In Richard Clarke's cyberthriller Breakpoint, hackers start their attacks by taking out undersea cables. Whether by bombing the landing sites, cutting the cables, or cyberattacking their routers, attacking these cables is near the top of everyone's list of cyberggedon scenarios.

A couple years ago, there was a series of cuts in the Middle East. Many suspected foul play, but as it turns out, such cuts are common, such as when ships drag their anchors along the bottom. That's why landing sites avoid shipping lanes. There is a cable cut somewhere in the world roughly every 3 days, and there are fleets of ships whose sole job it is to fix these cuts.

Even though they were accidental, they had a major effect on the Internet. Some countries in the Middle East were largely cut off from the Internet for a few weeks, and Britains found their VoIP to outsourced support centers in India to have enormous lag/latency, as packets had to be routed West through the United States, rather than East through the Suez Canal.

The NSA has their own nuclear powered submarine. Among the uses for such a thing is to sit off the coast of Russia and eavesdrop on radio waves. But of course, the other use could be to secretly tap these cables. But these cables are getting faster at an enormous rate. They continue to lay new cable, and they upgrade the equipment on the ends to increase they data rates they send through the cables. Older cables (i.e. 10 years old) would carry 200-gbps. New cables carry 6-tbps. A computer costing $2000 is able to monitor 10-gbps (assuming the right software), so the NSA would need just 20 computers to eavesdrop on  one of the old cables, but 600 of them for one of the newer cables.

I grew up in Oregon, a quiet state on the West Coast between Washington (home of Microsoft and Adobe) and California (home of Silicon Valley). Curiously, though, it's a major landing site for cables going to Asia. There are several reasons for this. One reason is that it's 700 miles shorter (calculating the distance NRT-PDX vs. NRT-LAX). Another is that Intel's main site is located in Hillsborough, Oregon, which has a created a small hi-tech mecca (Linus Torvalds lives in Oregon).

I've create a picture of Oregon in the map below. I've marked Intel (Hillsboro), Google (The Dalles), Facebook (Prineville), and Amazon (Boardman). You can see the landing sites for cables on the left. Click on the image to enlarge. 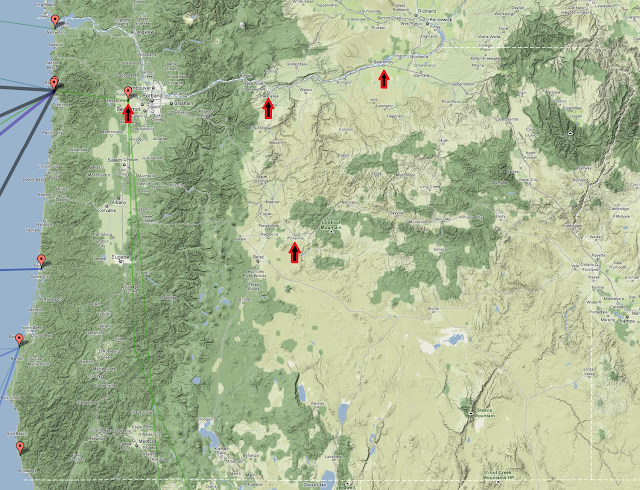 Too bad oregon has decided that hydro power isn't green enough. There are a number of dams that are slated to be removed without any solutions for replacing the lost capacity.