Don’t get sucked into conspiracies

Dr. Neal Krawetz is the best source for image analysis (that I know of). His work is awesome. Recently, when I visited his blog, I noticed that he got sucked into two conspiracy theories.

The first is a post on March 9 where he mocks the “conspiracy nuts” that criticized President Obama for staging a photo-op after his speech announcing Bin Laden’s death. Journalists were banned from the room during the actual speech, to avoid noise from cameras going off, so Obama re-enacted his walk down the hallway and first 30 seconds of his speech. Many of the photographs you see in newspapers of this event were actually of the later re-enactment.

Staging pictures like this is wrong. This is not a criticism of Obama, but of the press. This is against journalistic ethics. Journalists are supposed to deliver the truth, not some facsimile of the truth. It’s the equivalent to a scientist who adjusts measurements to the ones he knows are correct, or a lawyer who coaches a witness on what to say in the courtroom.

The news organizations tried to get around this by correctly captioning their photographs. For example, the Associated Press captioned theirs as “President Barack Obama reads his statement to photographers after making a televised statement ...”. Technically, this absolves them of guilt, but in practice, newspapers that eventually print the photographs remove or change these captions. Even when correctly printed, and read, most people will not immediately understand that this was staged photography after the event, rather than the event itself.

Thus, Krawetz is guilty of the partisan bickering he accused others of. Those articles made no criticism of Obama, just (correct) criticism of the press.

Both these problems have obvious explanations.

The missing EXIF image tags are caused by the fact the phone resized the image before sending it. When you send an image on virtually any smartphone, you are given the choice to make it smaller, to reduce the time and bandwidth needed to send it. When you do that, the phone strips out some of the EXIF information. I think all modern smartphones (iPhone, Android, Blackberry) used the same IJG that causes this behavior. Try this for yourself: take a photo, then send the original to yourself, then send an 800x600 smaller version. Now compared the EXIF tags. As well as reproducing this effect with my phone, I found many other images on the Internet with Google that have the same EXIF information as Wiener’s photo. 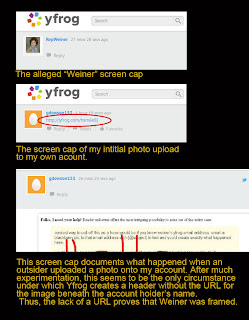 I don’t know what causes the “missing URL” problem, but there are tons of posts to Yfrog that have the same artifact. It took me all of 10 seconds to find numerous examples of this behavior, such as this one http://yfrog.com/gz1qunsj. It’s so common, it’s unreasonable to believe that only hackers could cause the effect. [***]

By the way, there is also this error level analysis conspiracy theory that is thoroughly debunked.


Krawetz discusses the fact that he is in the business of finding conspiracies, by using his awesome expertise in finding image manipulation, so that he might be biased toward conspiracy theories. It’s the same thing in the cybersecurity industry, where we are prone to blame hackers for everything. We should strive more to doublecheck our biases. When something looks too much like a conspiracy theory, we should look harder for alternate explanations of the “evidence”.


[***] Update: When I tested this page after I posted it, the YFrog link I used suddenly had the expected contents. The reason I didn't see it is because it's delivered via JavaScript, which updates the tweet information associated with the image, which sometimes doesn't happen. Furthermore, it appears YFrog gets the tweet information directly from Twitter's servers -- so if somebody deletes the associated Tweet, the caption disappears. Thus, my original attempt to debunk the conspiracy theory doesn't work -- but leads to what is almost certainly the real explanation.
By Robert Graham