Next year, at DefCon (the world's largest hacking conference), speakers are going to be confronted by hand signals (like 'twinkles') that were developed during the #OccupyWallStreet protests. That's because much of the audience will have attended one of the many "Occupy" protests.

So that speakers don't get weirded out by this, I thought I'd write up a brief guide. 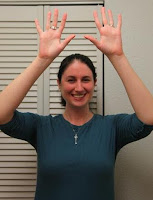 This is the most common hand signal. The audience raises their arms and flutters or "twinkles" their fingers (also known as 'spirit fingers'). This means they like what you are saying. It is a silent form of clapping, so that they do not interrupt you.

Down-twinkles (arms up, but fingers pointed down) indicates the reverse, displeasure at what you are saying. You'll get a lot of these when you talk about how good Windows security is, for example.

When they hold their arms in front, crossed, it means they dislike what you are saying so much that they are about to get up and leave. 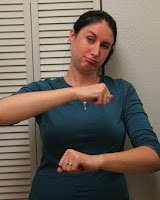 WRAP IT UP / GET TO THE POINT

There are two forms of this. One is the rolling motion, holding the arms in front and rolling them around each other. The other is holding the finger up and making a circling halo motion around the head.

It means the audience things you are rambling, and wants you to get to the point.

When you go beyond your allotted time, these will break out in the audience, indicating your should wrap up your speech and leave the stage for the next guy.

In this signal, the audience member holds up an index finger. There are some variations, such as holding up two bent fingers, or cupping the hand into a "C".

This asks you to clarify the point you just made, such as providing more details.

It's also done when they didn't hear you for some reason. For example, let's say there was a loud bang somewhere, the audience will hold their hands up like this, so just repeat what you just said. If it's an issue where they have problems hearing you general, they will do EARS.

Holds the palm or cupped hand to the ear. Means they can't hear you. Pretty obvious. 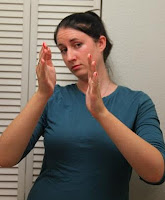 In this signal, the audience uses index fingers (or full palms) going back and forth. Both hands are used, with each hand going the opposite direction from the other.

This means the audience member has something to say, to correct something you've said, or to ask a clarifying question. 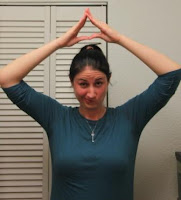 This is where they make a tent above their head with their fingers. It means you are getting off-topic. 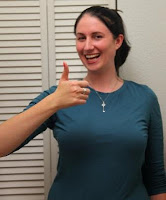 THUMBS UP, DOWN, TO THE SIDE

This is how the General Assembly at the Occupy movement votes on things, with the obvious result that thumbs-up means yes, thumbs-down means no, and thumbs-to-the-side means abstain. I'm not sure why you'd see these while speaking, but I thought I'd mention them.

Here's a video that explains some of these: