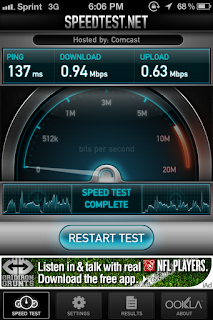 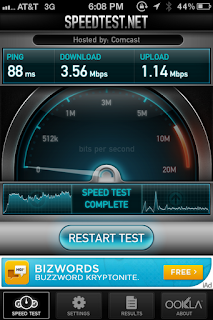 I'm returning my Sprint version of the iPhone 4S. The performance is far below either AT&T or Verizon.

Everyone loves to hate AT&T, but here's the thing: they've invested massively in building our their network to support devices like the iPhone and Kindle. Even in place where AT&T famously struggles (New York City and San Francisco), I can usually get a fair data connection. In my travels, AT&T 3G outperforms Verizon 3G in almost every case.

Sprint hasn't made that investment. At least, not here in Atlanta.
Traveling around the Atlanta area at various times in the day, I find
that Sprint consistently lags AT&T for 3G speeds. Sprint struggles to
reach 1-mbps, while AT&T rarely goes below 3-mbps. At times, Sprint
goes down to dialup speeds. Here are example of back-to-back speed
tests. I have a lot more samples, but these are representative of what
I see.

To be fair, Sprint has invested a lot in a 4G technology (based on WiMax)
that works much better, where 7-mbps is common. But the iPhone
doesn't support 4G technologies like WiMax. In addition, many people
are finding that WiMax falls behind LTE (used by AT&T, Verizon, and
T-Mobile).

Sprint does have one advantage. Currently, it supports "unlimited"
downloads, whereas Verizon offers a plan with up to 12-gigs of
downloads, whereas AT&T offers at most 4-gigs of downloads. In
addition, it's one of the cheaper plans, with unlimited texting and
data for only $80/month.

But in practice, few people use more than 2-gigs per month. I rarely
do. In those cases, AT&T can offer cheaper and faster plans.
I don't know which will be best for you, but for myself, I'm choosing
an AT&T iPhone 4S and returning my Sprint iPhone 4S.

UPDATE:
These are the last ones taken this morning, AT&T with 5.07mbps and Sprint with 0.21-mbps: 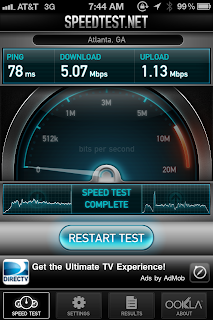 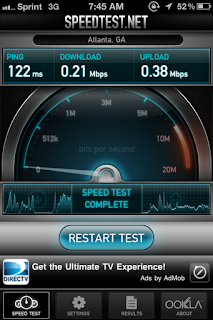 Update 2:
I returned The Sprint iPhone today and was told I was the 18th person to do so for the same reason. This makes me sad as I was a big fan of Sprint rolling out the first nextgen speed network.
By David Maynor

Ouch! I just downloaded the same app for my 3G Verizon Droid 2 Global (Stock FroYo ROM and everything), killed WiFi to force it over 3G and I still got better results than you got on Sprint. 1.08Mb/s down, 0.41Mb/s up. AT&T's not exactly known for its awesome bandwidth, either. Tethering with some older LG dumbphones of mine on Verizon, it wasn't unusual for me to get 1.5 down and 500k up with a speed test from my laptop, so my Droid 2's results aren't too far off from what I expected.

Sprint like any carrier that doesn't impose an explicit cap has an implicit cap. That means they forbid you to use some heavy bandwidth applications in their terms of service and they will throttle you for excessive usage.