I have a hard time recommending HP laptops because they are hostile to geeks (for example, you can't replace the built-in mini WiFi card), but the dm1z laptop from HP is otherwise a great computer for running hacker tools like BackTrack Linux (a distro that comes with all the open-source hacking tools). Right now, you can get one at Dealzon for $350, probably because HP is clearing inventory to make way for a new model.

What makes the dm1z great is its small size, being only a 3.5-pound 11.6-inch unit, yet having an extremely long battery life. For pentesters, this is awesome. It's not a good primary machine, but such cheap/small units make great secondary machines (my primary machine is a MacBook Air running Windows). It's low price means we don't mind leaving it in harms way, such as at a customer site in the bushes sniffing WiFi.

But at the same time, it does a pretty good job keeping up with the larger notebook computers. The three features that set it above competing small netbooks is gigabit Ethernet, a full GPU, and 8-gigs of RAM. The CPU, however, is anemic -- but except for password cracking (which runs great on the GPU) there is nothing we do that is CPU intensive.

The reason I use the dm1z compared to other Atom-based netbooks is its gigabit Ethernet. Other small computers have only 100-mbps Ethernet. This may seem like an unimportant feature, yet it keeps turning up.

I commonly leave the unit at a customer's site connected sniffing an important link to an encrypted drive. While these connections are usually less than 10-mbps, they often peak above 100-mbps. This causes packet loss on a normal system with 100-mbps Ethernet, but is handled by the gigabit Ethernet in the dm1z. It's only a RealTek chip with crappy drivers for Linux (though I hear it has good drivers for FreeBSD), so it's not going to keep up with too fast a network, but it still does a lot more than 100-mbps.

I also use this as a tool for generating HTTP load against web-servers, to test their scalability. Even with a scalable webserver like Nginx and Lighthttpd, you still have to go through a lot of configuration of the server an the underlying OS to make it actually scale. Having a convenient load tester in my pocket really helps.

Finally, there is just the normal case of having to transfer files to/from the device. This d1mz can do this at a full 1-gbps. This would be painfully slow over 100-mbps. This means that the little computer can act as an efficient file-server for your home network.


The CPU is weak, but the main processor doesn't matter so much as the graphics processor (GPU that's integrated on-die. This runs oclHashcat pretty well for password cracking. It's not as fast desktop GPUs, of course, but it's as fast as the low-end gaming laptops. The WPA cracking tool pyrit also works quite well with it.

Note that Radeon graphics are consistently faster than nVidia GeForce GPUs for password cracking. This makes the dm1z better for password-cracking than competing netbooks using an Atom+nVidia combination, and even faster than high-end gaming laptops based on mobile versions of GeForce.

The system can run the password cracking for hours while on battery power - being integrated right on the CPU makes the GPU very power efficient.

The device uses an AMD "Bobcat" CPU, which is AMD's answer to Intel's low-power "Atom" CPU. It's a dual-core 1.3-GHz processor (dual-issue, out-of-order). It's about as fast as an Intel Atom, but not as power efficient.

It is 64-bit, though. I eventually upgraded and put 8-gigs of RAM in the box from the original 4-gigs that I purchased with the system.


Popping off the back is easy, and it allows you to upgrade the RAM (to 4gigs) or upgrade the hard drive or replace it with an SSD.

The thing that really annoyed me is that you cannot change the miniPCIe cards. There are two slots for them. HP's BIOS checks the identifier of the card and refuses to boot if an unknown card is in the slot. Apparently, you can get hacked BIOSes from the Internet that get around this, but I don't want to waste my time.

Luckily, BackTrack 5 r2 has all the necessary drivers, so the existing WiFi card works now.


The latest BackTrack 5 r2 has all the necessary drivers. You still have to download the proprietary Radeon drives for password cracking, though. (The older BackTrack 5 wouldn't even boot correctly).

The one annoyance is that the mouse drivers aren't configured correctly. The mousepad doesn't have buttons, you have to press down on the pad itself. But then, this moves the mouse, so you end up clicking somewhere else. You have to learn to move with your finger (capacitive), then click with your fingernail (non-capacitive). Or use an external mouse.


For WiFi hacking, it's got three USB ports. This makes it convenient for hooking up three Alfa adapters. Plus you have the built-in WiFi as well.


I wanted to leave the existing partitions intact, but it already comes with too many partitions (Windows, Windows recovery, special Linux fast boot to browser). I had to fiddle around a bit to make things work.


Get the cheapest options you can and upgrade them yourself.

The unit ships with a 4-gig DIMM. Instead of paying $120 to upgrade, go to Crucial.com and pay $22 for an extra DIMM.

My unit has the older E-300 CPU at 1.3 GHz, but for $25 you can get the E-450 at 1.65 GHz, with also makes the GPU faster. But the whole point is getting the cheapest, most disposable system. If you need more CPU power, then getting a dm1-4170us instead with a dual-core Core i3 processor for $120 more will blow away the Bobcat processor.


This has proven to be an excellent netbook over the last year. I hate to recommend any HP products, because of the way it locks me out from choosing a different miniPCIe card, but it's otherwise been an excellent system. They are available for $350 on closeout right now, so I'd recommend picking one up.

Below is a picture of the dm1z in an action shot on the beach in the Caribbean. I didn't want to take my primary laptop due to fears of sand getting in it, and it getting stolen, so I took the dm1z instead. If you look closely, you can see the BackTrack background on it. This does highlight the fact that the screen sucks in bright sunlight (whereas my MacBook is pretty good in sunlight), but it's a cheap netbook, so that's what you expect. 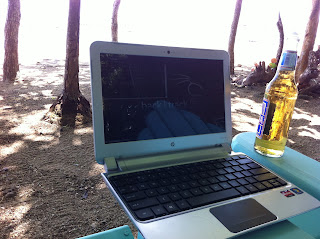 As well as other hashtypes that Atom has in there now.

Hi! Thanks for the post. I just ordered one of these, any tips for the partitioning?

What modes does the wireless card support?