Scalability: it's the question that drives us; it's a systemic anomaly inherent to the programming of the matrix.

Few statements troll me better than saying “Nginx is faster than Apache” (referring to the two most popular web-servers). Nginx is certainly an improvement over Apache, but the reason is because it’s more scalable not because it’s faster.

This can be visualized with the following graph of Apache server performance: 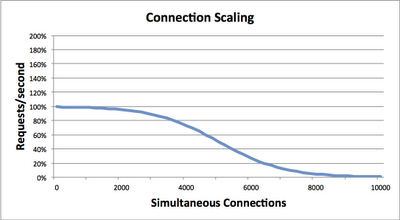 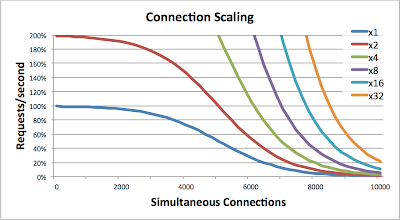 The above graph shows how increasing speed by two, four, eight, sixteen, and even thirty-two times still does not enable Apache to handle 10,000 simultaneous connections.

This is why scalability is a magical problem unrelated to performance: more performance just doesn’t fix it.

The solution to scalability is like the spoon-boy story from The Matrix. It’s impossible to fix the scalability problem until you realize the truth that it’s you who bends. More hardware won’t fix scalability problems, instead you must change your software. Instead of writing web-apps using Apache’s threads, you need to write web-apps in an “asynchronous” or “event-driven” manner.

A graph of asynchronous performance looks something like the following: 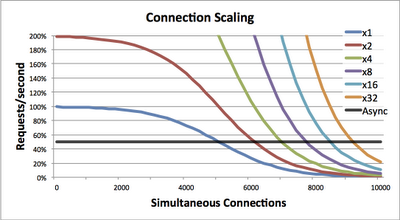 This graph shows why asynchronous servers seem so magical. Running Nginx or NodeJS on a notebook computer costing $500 will still outperform a $10,000 server running Apache. Sure, the expensive system may be 100 times faster at fewer than 1000 connections, but as connections scale, even a tiny system running Nginx/NodeJS will eventually come out ahead.


Morpheus: I'm trying to free your mind, Neo. But I can only show you the door. You're the one that has to walk through it.

The purpose of this post is to show you the last graph, demonstrating how asynchronous/event-driven software like Nginx isn’t “faster” than Apache. Instead, this software is more “scalable”.

This is one of the blue-pill/red-pill choices for programmers. Choosing the red-pill will teach you an entirely new way of seeing the Internet, allowing you to create scalable solutions that seem unreal to those who chose the blue-pill.

I'm sorry but NodeJS has huge issues and will not be able to handle many connections, mainly for other reasons (memory usage etc.). Nginx is a serious server, NodeJS is a hipster toy. It makes me sad to see them equated.