A lesson in math … and risk

Today is the eve of the US presidential election. I propose the following hypothetical scenario. A friend and I are talking. I think Obama is going to win the election. He thinks Romney will. He is so sure, he bets me $100. So we agree on the bet. The election comes around, and to my surprise, Romney actually wins. I fork over the $100, and my friend gloats over his winnings, saying I was stupid to have bet him, because he knew the outcome all along.

Here's what I do. After agreeing to my friends bet, I immediately log into http://www.Intrade.com, a website for betting on the election that works like a stock market. At this very second, Intrade gives 2:1 odds favoring Obama, whereas my friend is giving me 1:1 odds. Therefore, I arbitrage the difference.

First, I sell $66 dollars of Obama shares. This gives me the money right now, but I'll owe Intrade $100 if Obama wins. Second, I use that money to buy $33 of Romney shares. I pocket the remaining $33.

If Obama wins, my friend pays me $100, which I then pass on to Intrade to pay off those Obama shares. If Romney wins, Intrade pays me $100 for winning the Romney shares, which I pass onto my friend. Either way, I keep that original $33.

The fallacy is pretending that the outcome is knowable. Those predicting an Obama or Romney win pretend that if we just look at the right facts, that we can know the outcome of the election. In two days, after the election, those who got it right will then use this to prove that they “knew it all along”. But the outcome isn’t knowable, by anybody. A rainstorm in a Republican or Democrat area of a swing state could change the election.

What will be particularly annoying is that after the election, should Obama win, people will point to Intrade as proof of “wisdom of the crowds” for having successfully predicted the outcome. This gets the entire concept wrong. Intrade doesn’t predict a 100%/0% chance of an Obama victory, but a 66%/33% chance. Should Romney win, then that too proves Intrade right, that there was reason to doubt an Obama victory. The “wisdom of the crowds” doesn’t mean Intrade can predict the outcome of the election, but that the 66%/33% number it comes up with encapsulates all knowledge the crowd has about the outcome at this moment.

The underlying thinking here is “risk management”. It comes up in a lot of areas, like the financial meltdown, the Fukushima disaster, buying lottery tickets, global warming, or cyberterrorism. In all these cases, people pretend that outcomes are knowable, but they are in fact no more knowable than the outcome of a fair coin toss or this election. That’s not that they are 50%/50% like a coin toss, some are 66%/33%, other are 10%/15%/25%/50%, and others have stranger distributions. 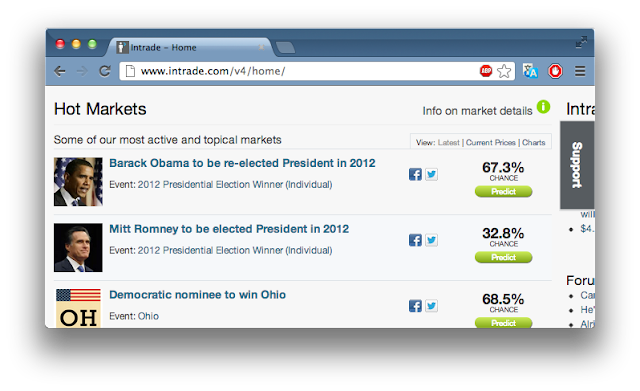