Sandy and the tragedy of collectivization

After the “we-built-that” controversy of this election, Democrats are using hurricane Sandy to refute Republicans, pointing out all the good that government is doing to help victims. For example, the Department of Defense has responded to the fuel shortage by sending in soldiers with 5000 gallon fuel trucks to distribute 10 gallons of gasoline free per person. Isn’t this proof that government helps? 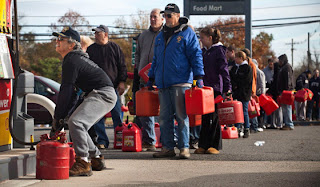 No, it isn’t. The fuel shortage is caused by government to begin with. The government has “price gouging” laws that prevent the price from rising. That means those in nearby states can’t ship gasoline to the region, because they can’t cover their costs. Government licenses who can handle gasoline and dictates its precise formula, likewise making it difficult to bring in extra supplies from other places.

The problem here is that government has collectivized gasoline. In the name of the collective good, it dictates precisely how the market should work. This means that in a crisis, the free market is forbidden from responding, leaving only government to help.

If you want gasoline in the region, the solution is to un-collectivize it, getting rid of the bureaucratic rules. Instead of emergency price gouging rules, you should have emergency deregulation. Get rid of all the normal restrictions. Make it clear that in order for there to be enough gasoline for people who need it, that the government expects the price to at least double in an emergency. A doubling of gas prices isn’t a terrible thing. The normal price of gas in Paris is $7 a gallon anyway, over double that in New York. 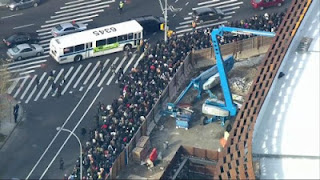 More evidence of the evils of collectivization are the long lines at buses, as people stand in line to get a ride. New York has the most collectivized transport system in the nation. Those seeking to create alternative transport have long been stymied, even before the tragedy. For example, the company “Uber” tried to Internet enable taxi cabs, but were put out of business this October by the New York city Taxi and Limousine Commission.  New York’s fight against private van service has been legendary.

If you want to fix the temporary transport problem in New York city, then get rid of the all the rules during the emergency. Allow any poor guy with a van to charge whatever he wants to give people a ride, which will likely be more expensive because they will have to pay for the $7/gallon gasoline (or wait 3 hours in line for at the gas station every day).

In a crisis, the free market still works. Few people are traveling to the New York area to volunteer their time. But, if they can profit from the tragedy, they’ll show up in droves. But “profiting from tragedy” sounds bad, so no matter how much that helps people, collective rules forbid it. That leaves only government who can help, and frankly, they do a poor job at it.

I point this out because the Internet is next for collectivization. The more we rely upon it, the more it will become overregulated like gasoline, a collective good that is run by the government rather than the free market. You’d think organizations like the EFF would stand against collectivization. After all, it still publishes a “Declaration of Independence of Cyberspace” that declares the Internet to be sovereign. But no, the EFF leads the collectivist movement, with such things as pushing for “net neutrality” regulation. Most recently, with regards the Hurricane Sandy, it announced a new collectivist effort for open wireless. If I were in New York, and my apartment had a working Internet connection, I’d get some directional antenna pointed at the street, OpenWRT, and charge people as much as I could for Internet access during the tragedy. I’d also filter BitTorrent. According to the EFF, that makes me evil, no matter how many people I'd help.


Update: In the comments is a link to how those who aren't unionized are forbidden from fixing the power grid.
By Robert Graham

Libertarians, sure, but the today's Republican Party is far less a free-market party than it is a party who doles out favors to a different constituency.

You'll appreciate this, too: volunteer power company teams have been turned away from some areas of NJ for not being unionized.
http://dailycaller.com/2012/11/02/new-jersey-town-to-ala-volunteer-utility-crew-dont-help-with-sandy-unless-youre-unionized/

Personally, I think something like that should result in a class action suit against the local unions and providers since they're endangering lives. Kinda crazy...

It's important to note that it's not just that "profiting from tragedy" sounds bad, it's that without prohibitions on price-gouging, the rich can buy things that the poor can't, like safety, food, or the ability to get to work. While we are/society is apparently okay with this to some degree during normal times (see: health care), we also think that emergencies should not exacerbate this type of inequality.

In short, we say that people should be able to buy gasoline because (1) they are people and (2) they would be able to during normal times. We reject (3) you have to be rich or richer.

Yes, this creates costs like lines, but the alternative comes with costs too, and with our price-gouging rules we are saying that that cost is greater.