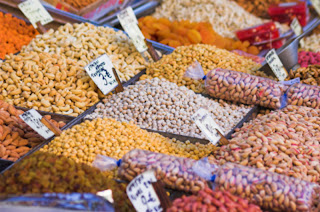 The next-gen gaming consoles (PlayStation 4, XBox One) contain 8-GB of RAM. That means a sometime jerkyness in games as the console loads scenes into memory from disk. Why so little memory? Wouldn't it be better to just put more RAM in the device, like doubling to 16-GB? Sure, while RAM is expensive for you and me ($50 for 8GB), Sony/Microsoft can buy in bulk and get a cheaper price, like $20. That doesn't make much difference when selling the console for over $400.

Actually, they don't get such savings. "Buying in bulk" is a myth. If it costs us $50/8-GB, then adding that memory to the console will jack up its price by $50. At least.

In other words, within the margin of error, the price for a single DIMM on NewEgg roughly equals the bulk price on the spot market.

Why is that? It's because we've gone past the "Industrial Age" to the "Information Age" to the "Supply Chain Age". Every step in the supply chain has slashed margin prices and increased efficiencies to the point that buying single products is just as efficient as buying bulk products.

Of course, if you go to your local BestBuy store, a single DIMM costs more than bulk DIMMs, but that's because "local retail" is a completely separate beast than online markets. Retail is an enormous drag on the tail of end of the hyperefficient supply chain that jacks up prices, which is why you should generally avoid it. So yea, you can find examples where there is a disparity between single-vs-bulk prices, but that's not relevant to the discussion.

A somewhat more relevant discussion is the difference between the "spot price" and "contract price". When Microsoft builds an XBox, they contract with a couple DRAM manufacturers. They guarantee to buy a set amount of memory at a set price, in exchange for the supplier guaranteeing to sell Microsoft that quantity. They do this not to get a savings, but to reduce business risk by making the costs predictable. On one hand, if there is a factory fire and the DRAM spot price goes up, Microsoft's contract means it won't get charged more. On the other hand, if DRAM prices go down, Microsoft still has to pay the more expensive price. Looking at "contract price" on sites like http://www.dramexchange.com/ and http://www.insye.com/DP/DRAMSpotPrice.aspx, it appears contract prices are actually higher than spot prices -- at least as I write this. I don't know if that's always true.

So here's the deal. We've been indoctrinated by pushy advertising to believe "deals" are to had by buying in bulk, so it's a hard thing to develop skepticism to that idea. Yet, as the math in this post shows, buying in bulk really is a myth.

To preserve today's prices, I've got screenshots to show this. Below are the NewEgg and spot market prices that I captured right this second: 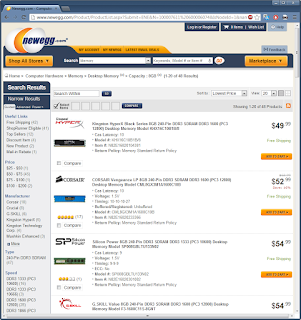 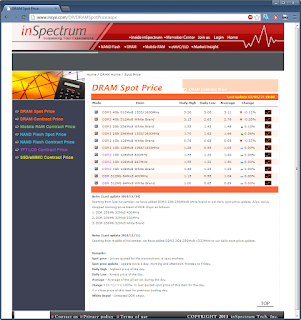 Update: On twitter, somebody has accused me of cherry picking this data. I didn't. I did my best to get averages. I googled "DRAM spot price" and got two different sources:
* $3.14 at http://www.dramexchange.com/
* $3.11 at http://www.insye.com/DP/DRAMSpotPrice.aspx
I chose the lower of the two (i.e. the one that best disproved my theory).

NewEgg is used all over the web as the standard measure of "how much things cost". I just grabbed a well-known brand, Kingston in this case, rather than an offbrand of dubious quality. Even the more expensive modules are only $55, again, very close to the bulk price.