Well, that's it for Cards Against Humanity 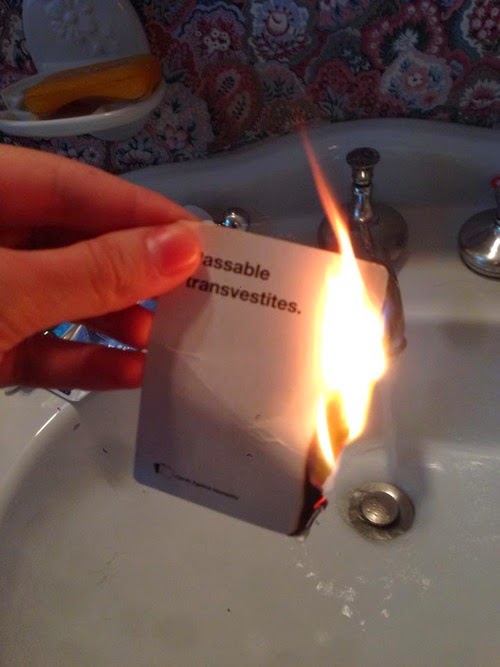 As many of you know, I've enjoyed playing Cards Against Humanity at hacking conferences. I won't be doing that again, as they have caved to censorship. The issue is over the card with noun "passable transvestites", which some LGBT advocates found offensive to point the burning the card (in the best book burning tradition). The creators of the game have apologized for the card and removed it from the game.

Of course the card is offensive. That's the point of the game: to make fun of and offend everybody. That's also the point of "free speech", that nobody is above criticism and ridicule. President Obama is a dick, Mohamed molested children, and school teachers are fascists. I can say such things because in this free society, no matter how how "holy" something it is, absolutely nothing is so holy that it can't be criticized or insulted.

Maybe that card crosses a line. That's fine, but then it has to be replaced by some other card that, in a good natured way, pokes fun at the LGBT community. I know they are a bit sensitive about this, since oppression of gays is still the norm in much of the world, and still even happens here. But I reject the idea that they are above being poked fun of. Tolerance means we poke fun at them in every much the same way we poke fun at everything else. Shows from South Park to Will and Grace have helped changed popular attitudes by showing gays as normal people -- including as people being the target of humor. Holding the LGBT community above this means creating a festering wound that will never heal -- where LGBT jokes become only the domain of shock comics.

As a free speech advocate, I boycott things that attacks speech. BookCard burning fits that description. This is just one more thing to add to my list.

aladdinsbikes said...
This comment has been removed by the author.
8:12 AM

What a bummer. Thanks for pointing this out -- I had not idea they caved.

Free speech and what is or is not okay to say in public is difficult for me to understand.

I recently moved to a large city and have been told on many occasions what is and is not okay to say in public, even in jest and even amongst friends. It makes me uncomfortable that I have to watch myself around people I've known for years, because some things are just 'not okay'. It's a bit black and white.

Have you experienced this? How do you understand it?

Loved this post. Thanks for sharing your day!
Instant Annuity Rates

They removed the card prior to this post. They have also removed other cards that are not as funny now as they were 5 years ago to a bunch of college kids.

** This was mostly taken from a culmination of other posts about this topic.

there's a difference between offensive and bigoted. is this really the hill you wanna die on dude